A motion is said to be accelerated when its velocity keeps changing. But in simple harmonic motion, the particle performs the same motion again and again over a period of time. Do you think it is accelerated? Let’s find out and learn how to calculate the acceleration and velocity of SHM.

The negative sign indicated that acceleration and displacement are in opposite direction of each other. Equation I is the expression of acceleration of S.H.M. Practically, the motion of a particle performing S.H.M. is accelerated because its velocity keeps changing either by a constant number or varied number.

After integrating both sides, we get,

Hence, v2 /2 = -ω2 x2 /2 + C where C is the constant of integration. Now, to find the vaue of C, lets consider boundary value condition. When a particle performing SHM is at the extreme position, displacement of the particle is maximum and velocity is zero. (a is the amplitude of SHM)

Taking square root on both sides, we get,

Learn the difference between Periodic and Oscillatory Motion. 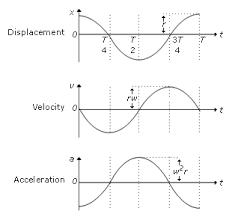 Q: What is the value of acceleration at the mean position?