Clouds are integral decision-makers in the climatic changes of the environment. In addition to that, clouds are also important in maintaining and balancing the earth’s radiation. Depending on the cloud intensity and other climatic changes caused by them, the short and long wavelength radiation fluctuates. Cloud Formation has been a major topic of study for numerous branches of science, proving that they are much more than just simple structures that decide the type of rainfall a place can have. 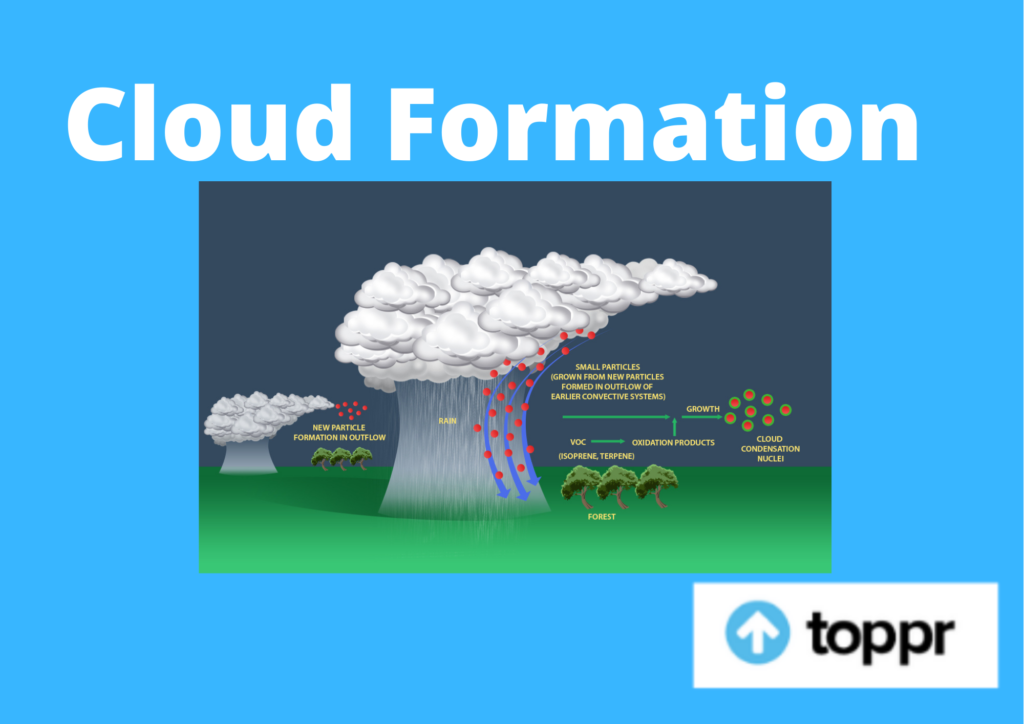 Definition: Clouds are formed when water droplets and ice crystals combine to form a floating mass in the sky.

When the atmospheric condition is just right, water vapour combines with aerosol particulates and condensation occurs. This results in the warmer air to rise along with the vapour into higher altitude where the temperature is low and hence the clouds are formed.

The physical structure, size, and colour of the clouds help in determining the upcoming weather pattern. Clouds are broadly classified into 10 different types based on the 3 levels of altitude they are generally formed at.

There is another phenomenon similar to clouds. Fig is formed close to the ground surface and it should never be confused as a cloud. Further, the composition may look similar but clouds and Fogs are byproducts of a different chain of events.

However, fog is also an aerosol that is found suspending very low and is often influenced by the topography of the land, wind direction, and presence of water bodies nearby.

The Physics behind Cloud Formation

The physics of cloud formation is much more intricate than the simple analysis of weather based on the cloud structure. Cloud Physics is conceptualized based on two major aspects.

Mechanism of Formation of Clouds

Clouds compose of very tiny water droplets and ice particles. These are lightweight enough to float in the atmosphere. Clouds can form as a result of various kinds of atmospheric phenomena.

The mechanics of cloud formation includes evaporation of water droplets from the surface and condensation into clouds at a higher elevation. Moreover, the procedure occurs in the presence of very low pressure and low-temperature zone surrounding the vaporized water.

A practical demonstration of the process of evaporation and condensation of water can help in understanding the process of cloud formation better. Further, the experiment shows the transformation of the water droplets into their vaporized state. Following the change in the atmospheric condition at a higher elevation, we can see the water droplets transforming into clouds.

The objective of the experiment

The principal objective of the experiment is to learn about the process of cloud formation by experimenting with a few household products.

Fill a glass with three fourth with warm water. On top, add shaving foam slowly up to the brink. Once the foam settles, it is time for the second crucial aspect of the experiment.

In a different bowl, mix blue food colour with a very small amount of water  Use a dropper to collect the diluted food colour and slowly drop it on the shaving foam.

This is where one can get to see the formation of clouds. As the cloud saturates with the water diluted colour, we can see precipitation forming on the clear water at the base of the foam.

Further, we know that clouds form due to the surface rise of temperature. Thus causing water to evaporate and rise to the higher elevation and then condense into clouds. Similarly, the warmer water in the jar heats up and results in a slight amount of evaporation.

The vapour rises and comes in contact with the cooler temperature above and thus results in condensing on the shaving foam particles. The bluish colour tint on the lower surface of the foam represents the mechanism of the formation of clouds.

While the dissolution of colour downwards represents the gravitational pull resulting in changing of the condensed cloud into raindrops.

Millions of tiny water droplets that float in the air combine to form large floating masses known as clouds. Moreover, clouds create a natural barricade to absorb the infrared radiation and redistribute solar radiation over a larger surface area.

Question 1: Why are clouds yellowish in colour sometimes?

Answer 1: The yellowish discolouration of clouds occur due to the presence of pollutants floating on the earth’s surface. The majority of these pollutants include nitrogen dioxide remnants of forest fires and dump yard burning.

Question 2: How do clouds form?

Answer 2: Clouds form as a result of evaporation of surface water. It condenses into tiny floating droplets under low pressure and low temperature at a higher elevation.