We know that Isotopes are multiple variants of the same elements with different Neutron Numbers irrespective of the same number of Protons present. The altering Neutron numbers also result in a different Nucleon Number. The best example of an Isotope is Deuterium, commonly we refer to it as Heavy Hydrogen. It is an alternate variant of Hydrogen that has only a single Neutron  Whereas, Hydrogen is present in abundance in the atmosphere. 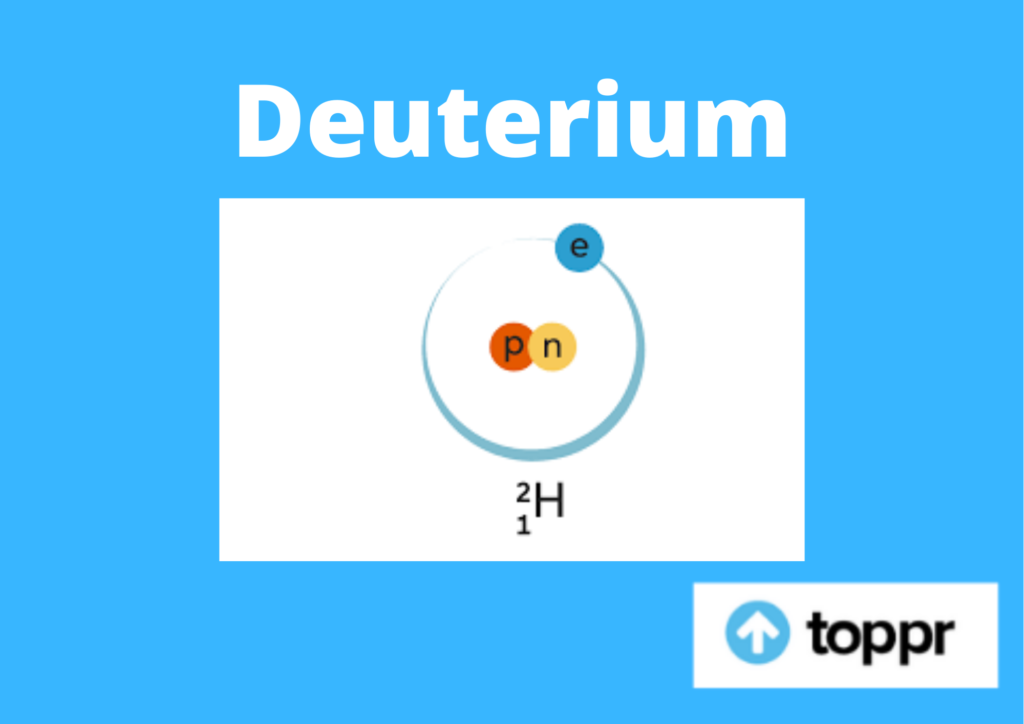 We often state that it is the ultimate gift of the Big Bang. In between the creation of Helium and Hydrogen, the isotopic modification occurred rendering in the formation of the alter ego of Hydrogen, Deuterium.

The ratio of Deuterium to Hydrogen occurring naturally was first measured in its ionic form, however later on when it was measured again based on the spectre of the earth’s atmosphere, a mass spectrometer was used to deconstruct its chemical structure.

Definition – It is the stable isotopic variant of Hydrogen Gas consisting of a single proton and a single Neutron. Protium which does not have a neutron account for 99.9 per cent of the naturally occurring oceanic Hydrogen while the presence of Deuterium is only 0.02%.

Deuterium Oxide or Heavy water is a term which we use for water that has a chemical composition consisting of 2 atoms of Deuterium and 1 atom of Oxygen. Like any other compound, this Oxide also has the ability to form hydrates by forming a hydrogen bond.

It shows a few specific structural features. These include:

Despite its structural stability, extracting it is not a very easy process. Available readily in Sea Water, there is an intricate manufacturing process for its extraction.

In addition to this common methodology, other alternate mechanisms include:

It has a wide range of applications despite its scarcity.

We often regard it as a non-toxic and non-corrosive substance. Further, it is highly flammable just like Hydrogen. SO proper anti-flammable outerwear is necessary while handling it.

Additionally, since it is heavier than Oxygen, it can replace it and cause asphyxiation. Immediate oxygen administration is mandatory to prevent further internal organ damage.

Answer 1: Contrary to popular belief, heavy water is neither corrosive nor radioactive in its pure form. A small amount of Heavy water does not cause any harm. However, prolonged usage or drinking in large volumes can result in poisoning.

Question 2: What are the chemical properties of Deuterium?

Answer 2: It is present in a gaseous state. It has no odour or colour, nor does it have any radioactive properties.

Question 3: What is the impact of Deuterium on Living Organisms?

Answer 3: It has a very unique Physiochemical structure, in addition to a very strong Kinetic isotopic behaviour pattern. Though we see no radical change, however, cells treated with Deuterium show a significant altercation in the process of cellular regeneration and energy metabolism. However, these changes are specific to a certain variety of organisms only. Humans are conducting Massive Marine researches to understand the kinetic isotopic behaviour of Deuterium in various different living organisms.