Groundwater is often in use in many public sectors such as agricultural, municipal, and industrial. It is put to use by constructing and operating extraction wells. Hence, the study of the distribution and movement of groundwater is very important in our life. The term related to this study is hydrogeology, which is also known as groundwater hydrology. 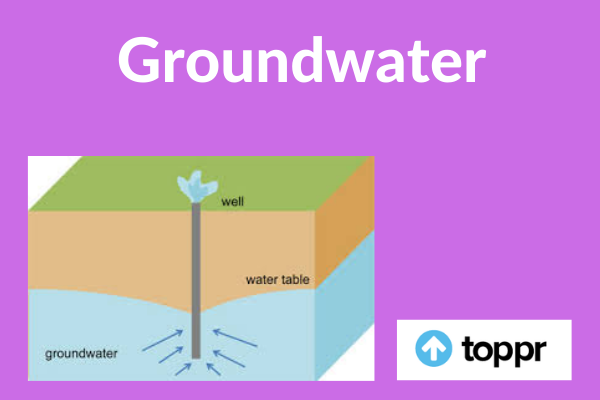 The water present beneath the surface occupying void soil spaces or within the fractures of rock formations is known as groundwater. A common name related to groundwater is an aquifer. An aquifer is a part of the rock or a viscous deposit which provides a usable quantity of water.

Groundwater is recharged from the surface; it’s going to discharge from the surface naturally at springs and seeps and may form oases or wetlands. Theoretically, groundwater is mentioned, like water flowing through shallow aquifers, but, practically it also can contain permafrost or frozen soil, immobile water in very low permeability bedrock, soil moisture, and deep oil formation water.

Groundwater is usually cheaper, more convenient and fewer susceptible to pollution than surface water. Therefore, it’s commonly used for public water supplies. For instance, groundwater provides the most essential source of usable water storage within us. California annually withdraws the most crucial amount of groundwater of all the states. The underground reservoirs usually have a lot more water holding capacity than all surface reservoirs and lakes within the US, including the Great Lakes.

Polluted groundwater is a smaller amount visible and harder to wash up than pollution in rivers and lakes. Groundwater pollution most frequently results from improper disposal of wastes ashore. Among all the major sources of groundwater pollution, the most common include industrial and household chemicals, industrial waste lagoons, garbage landfills, excessive fertilizers and pesticides utilized in agriculture, tailings and process wastewater from mines, industrial fracking, leaking underground oil storage tanks and pipelines, septic systems and many others.

A confined aquifer is curtained by an impermeable layer of rock or substrate. If a confined aquifer moves downward from its recharge zone, groundwater can become pressurized. This, in turn, will create artesian wells that flow freely without the necessity of a pump and rise to a better elevation than the static water level at the above, unconfined, aquifer. The characteristics of aquifers vary with the geology and structure of the substrate and topography during which they occur. Usually, the more productive aquifers are made of sedimentary geologic formations.

One can find the volume of groundwater in an aquifer by measuring the water levels in local wells and by examining the geologic records from well-drilling to figure out the extent, thickness and depth of water-bearing sediments and rocks.

Groundwater makes up about thirty per cent of the world’s water supply, which is about 0.76% of the whole world’s water, including oceans and permanent ice. Global groundwater storage is roughly adequate to the entire amount of freshwater stored within the snow and ice pack, including the north and south poles. This makes it a crucial resource which will act as natural storage which will buffer against shortages of surface water, as in during times of drought.

The surface water collected from precipitation, streams, and rivers replenishes the groundwater when this recharge reaches the water level. Groundwater is often a long-term ‘reservoir’ of the natural water cycle. The Great Artesian Basin in central and eastern Australia is one among the most important confined aquifer systems within the world, extending for nearly 2 million km square. Recent research has demonstrated that evaporation of groundwater can play a big role within the local water cycle, especially in arid regions.

Certain problems have beset the utilization of groundwater around the world. Presently Aquifers are over-used and polluted in many parts of the planet. Another problem is that aquifers are out of sight. The other critical problem is with the water management agencies. When calculating the “sustainable yield” of aquifer and river water, they often count equivalent water twice, once within the aquifer, and once in its connected river.

Groundwater may be a highly useful and sometimes abundant resource. However, over-use of it can cause major problems to human users and to the environment. The most evident problem may be a lowering of the water level beyond the reach of existing wells. As a consequence, wells must be drilled deeper to succeed in the groundwater. A lowered water level may, in turn, cause other problems like groundwater-related subsidence and saltwater intrusion or worsened by anthropogenic factors.

Subsidence occurs when an excessive amount of water is pumped out from underground, deflating the space below the above-surface, and thus causing the bottom to collapse. When excessive pumping is done to take out groundwater from aquifers, pore pressures within the aquifer drop and compression of the aquifer may occur.

Around 30% of the world’s population drinks groundwater from different resources. Around 300 million people or 10 per cent, obtain water from groundwater resources that are heavily polluted with arsenic or fluoride. These chemicals are very harmful to us.

Q.1. How does groundwater clean itself?

Answer – Groundwater is often clean and ready to drink. The reason behind is that soil actually filters the water. The soil has the capacity to hold onto pollutants such as living organisms, harmful chemicals and minerals—and only let the clean water through.

Q.2. How can you treat groundwater?

Answer – Groundwater generally is treated by drilling recovery wells to pump contaminated water to the surface. The most commonly used treatment for cleaning groundwater is air stripping, air sparging and filtering with granulated activated carbon (GAC).

Q.3. Can you purify contaminated groundwater?

Answer – Yes we can purify groundwater with a process of remediation. It is a process that is in use to treat contaminated groundwater by removing the pollutants or converting them into harmless products.

Share with friends
Previous
Sources of Energy
Next
Rock Cycle