What is Electric Flux?

If there is no given net charge within a given closed surface then every field line directed into the given surface continues through the interior and is usually directed outward elsewhere on the surface. The negative flux just equals in magnitude the positive flux, so that the net or total, electric flux is zero.

If a net charge is contained inside a closed surface, the total flux through the surface is proportional to the enclosed charge, positive if it is positive, negative if it is negative. 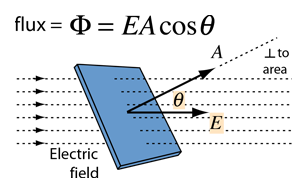 The mathematical relation between electric flux and the enclosed charge is known as Gauss law for the electric field. It is one of the fundamental laws of electromagnetism. In the related meter-kilogram-second system and the International System of Units (SI) the net flux of an electric field through any closed surface is usually equal to the enclosed charge, in units of coulombs, divided by a constant, called the permittivity of free space.

In the centimeter-gram-second system, the net flux of an electric field through any closed surface is equal to the consistent 4π times the enclosed charge, measured in electrostatic units (esu). Electric flux is proportional to the number of electric field lines going through a virtual surface. You can understand this with an equation.

where the electric field is E, multiplied by the component of area perpendicular to the field.

Question: An electric field of 500 V/m makes an angle of 30.00 with the surface vector. It has a magnitude of 0.500 m2. Find the electric flux that passes through the surface.

Solution: The electric flux which is passing through the surface is given by the equation as:

Notice that the unit of electric flux is a volt-time a meter.

Question: Consider a uniform electric field E = 3 × 103 î N/C. What is the flux of this field through a square of 10 cm on a side whose plane is parallel to the yz plane?

Solution: The flux of an electric field is given by,

Therefore,  the flux of the field through a square of 10 cm on a side whose plane is parallel to the yz plane is 30 Nm2/C