The study of science is incredibly interesting and filled with fun facts. The deeper one dives into the concepts of science and its related fields, the greater amount of knowledge and information there is to learn in there. One such topic of study is the Gauss Law, which studies electric charge along with a surface and the topic of electric flux. Let us get to know more about the law and the manner of its operation so that we can understand the equation of the law. 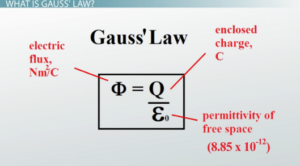 Gauss’s law states that the net flux of an electric field in a closed surface is directly proportional to the enclosed electric charge. It is one of the four equations of Maxwell’s laws of electromagnetism. It was initially formulated by Carl Friedrich Gauss in the year 1835 and relates the electric fields at the points on a closed surface and the net charge enclosed by that surface.

Flux is a measure of the strength of a field passing through a surface. Electric flux is defined as

We can understand the electric field as flux density. Gauss’s law implies that the net electric flux through any given closed surface is zero unless the volume bounded by that surface contains a net charge.

Question: There are three charges q1, q2, and q3 having charge 6 C, 5 C and 3 C enclosed in a surface. Find the total flux enclosed by the surface.

Therefore, the total flux enclosed by the surface is 1.584 Nm2/C.