First of all, Pascal unit is something very important in the field of physics. Furthermore, we know that strong winds during a storm or a cyclone can blow away the surroundings and even the roof-tops. Moreover, we know from the everyday science knowledge that the cyclones and winds are caused by the differences in air pressure. 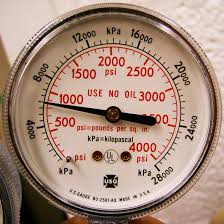 The Pascal abbreviated as Pa refers to as the SI unit (International System of Units) of Pressure. Furthermore, pressure, in science, is defined as the force acting per unit area. The unit of Pressure has been named after Blaise Pascal.

Blaise Pascal was a French mathematician and philosopher. Moreover, during his time, he has developed and invented so many things that we still use in our daily life and are very common in everyday science.

His contribution to the field of hydrostatics is certainly immense. He has also invented a calculator, the syringe and the hydraulic press.

One Pascal (Pa) is defined as the pressure imparted by a Force of one Newton perpendicularly on the area of one square meter.

Mathematically, one can derive the expression as follows,

(where N is Newton, m is the meter, kg is the kilogram, s is the second, and J is the Joule).

Other Units of Pascal

A Pascal (Pa) unit is small. And for this, other units of Pascal are in usage. These are the multiple units of pascal.

Multiple units of the pascal are hectopascal, kilopascal and megapascal.

The pascal is a unit of measuring the pressure throughout the world. It has mostly replaced the psi unit or pounds per square inch used in the imperial measurement system.

Geophysicists around the world use the higher units of pascals like the Gigapascal (GPa), for measuring the tectonic stresses or calculating pressure within the Earth.

In the material science and engineering department, the pascal measures the tension (or the tensile strength), stiffness and compressive strength of materials.

It is also useful in the measurement of sound pressure or loudness of sound. One pascal is equal to 94 decibels (dB)

Q. Is Pascal a derived unit?

All the other units are derived from these and Pascal (Pa) is one such derived unit, as explained in the below expression: