Continuity equations describe problems that are often but not always conserved. Thus, they usually include terms like ‘source’ and ‘sink’. These terms allow continuity equations to describe quantities like the density of a molecular species. This species can be created or destroyed in a chemical reaction. Thus, its density is generally conserved until the molecule itself disappears or adds up in a chemical reaction. 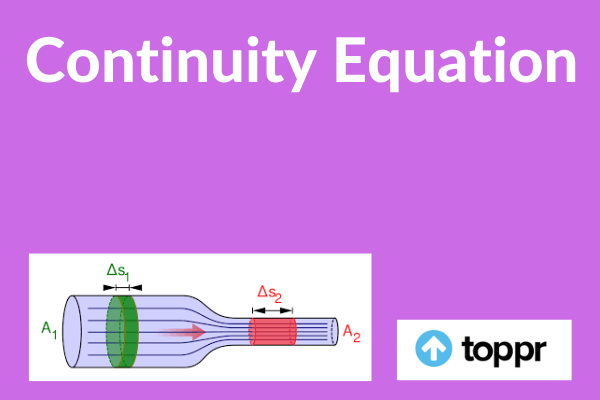 Conservation laws can be represented by stronger, more local forms which are the continuity equations. Energy can neither be created nor destroyed. This is a weak version of the conservation of energy which proposes that the total energy in the universe is constant.

But the issue with this statement is that it does not include the possibility that a state of energy can suddenly disappear from one point and can simultaneously appear at some other point. This refers to the need for a stronger statement that says that energy is locally conserved. Energy can neither be created nor destroyed nor is it able to teleport from one place to some other place. Its movement is restricted to a continuous flow. Thus, to express these types of statements, continuity equations are used.

Some of the statements of the integral form of the continuity equation are given as:

The rate of increase of q within a volume V is given by the continuity equation:

q is the total amount of quantity

S is the surface

\(\oint j.dS\) is the surface integral over the closed surface

j denotes the flux of q

\(\sum\) becomes more positive when q is being generated and thus it is called the source of q. On the other hand, \(\sum\) becomes more negative when q is being destroyed. Thus it is called the sink of q. This term is also denoted as \(\frac{dq}{dt}|_{gen}\). This is the total change of q from its destruction or generation inside the volume. To understand in an easier way, let’s suppose the volume to be a building and q the number of people in the building. The walls, roof, doors and the foundation of the building will rightly act as the enclosing surface.

We can express a general continuity equation in the form of a differential equation by the divergence theorem:

j denotes the flux of the quantity

\(\rho\) is the quantity per unit volume

This makes q a conserved quantity. This means that this quantity can neither be created nor destroyed. \(\sigma\) becomes zero and thus, the equation gets modified. The final equation becomes:

j denotes the flux of the quantity

\(\rho\) is the quantity per unit volume

Q.1. How do we express the continuity equation with respect to electromagnetism?

Answer. The continuity equation is more of an empirical law which expresses charge conservation in the field of electromagnetism. It is the consequence of Maxwell’s equations but more fundamental. The equation states that the current density J is the negative rate of change of the charge density \(\rho\).

Current is basically charge per unit time. The equation states that if there is the outward movement of the charge from the differential volume, then the amount of charge in the volume decreases. Thus, the rate of change of charge density is negative. This verifies that the continuity equation tends to state the conservation of charge.

Q.2. How do we write the continuity equation for a particle that is constantly moving?

Q.3. Which continuity equation is prevalent in the fluid dynamics?