Alpha decay is a type of radioactive disintegration in which some unstable atomic nuclei dissipate excess energy by spontaneously ejecting an alpha particle. The resulting daughter nuclei have a mass number reduced by four and an atomic number that’s reduced by two from its parent nuclei. An alpha particle is just like the nucleus of a helium-4 atom, which consists of two protons and two neutrons. It has a charge of +2e and a mass of 4u. 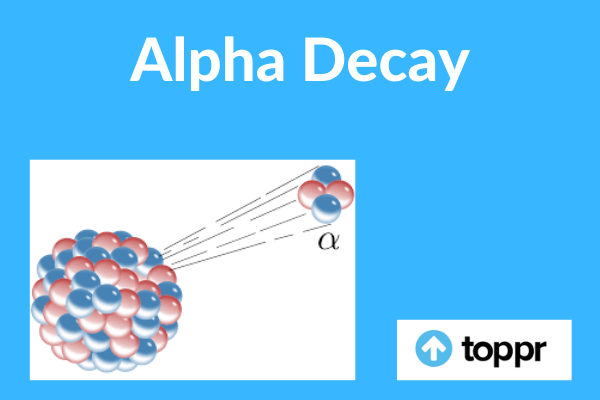 What is Alpha Decay?

Alpha particles have a charge +2e decay is far and away from the foremost common sort of cluster decay, where the parent atom ejects an outlined daughter collection of nucleons, leaving another defined product behind. Like in case of other cluster decays, Alpha decay is also a fundamentally quantum tunnelling process.

It is governed by the interplay between both the nuclear force and therefore the electromagnetic force. Alpha particles have a typical K.E. of 5 MeV due to their relatively large mass, the electrical charge of +2e and comparatively low velocity. Alpha particles are very likely to interact with other atoms and lose their energy, and their progress is often stopped by a couple of centimetres of air.

Rutherford first gave us the idea of alpha particles during his investigations of radioactivity in 1899, and by 1907 they were identified as \(He^{2+}\) ions. By 1928, Gamow had solved the idea of alpha decay via tunnelling. The particle is trapped inside the nucleus by a beautiful nuclear potential well and a repulsive electromagnetic potential barrier.

The Mechanism behind Alpha Decay

Quantum mechanics is different from the above as here the particles flee via quantum tunnelling. In 1928, George Gamow, Ronald Wilfred Gurney and Edward Condon together developed the quantum tunnelling theory of decay.

The Geiger–Nuttall rule describes the relationship between the decay constant of a radioactive isotope with the energy of the alpha particles emitted. This rule also comes in with a theory that half-lives are exponentially hooked into decay energy, in order that very large changes in half-life make comparatively small differences in decay energy, and thus particle energy.

According to this rule, those isotopes having short life emits more energetic alpha particles than long-lived ones. This law was stated by Geiger and Mitchell Nuttall within the year 1911, hence the name was dedicated to those physicists.

In general, the subsequent is that the thanks to write the formula for alpha decay:

Americium-241, an alpha emitter, is employed in smoke detectors. Decay can provide a secure power source for radioisotope thermoelectric generators used for space probes and is in use for implant pacemakers. Static eliminators typically use polonium-210, an alpha emitter, to ionize the air, allowing the ‘static cling’ to dissipate sooner.

Touching an alpha source is usually not harmful, as alpha particles are effectively shielded by a couple of centimetres of air, a bit of paper, or the skinny layer of dead skin cells. But if the ingested chance of double-strand breaks to the DNA is present. The Russian dissident Alexander Litvinenko’s 2006 murder by radiation poisoning is said to have possessed with polonium-210, an alpha emitter.

Answer – Alpha particles can’t penetrate very far through matter as they are highly ionising. They are usually brought to rest by a few centimetres of air or less than a tenth of a millimetre of biological tissue.

Share with friends
Previous
White Light
Next
Conductivity of Water