With the increasing problem of Carbon Emissions, the need for alternative means of fuel has been one of the primary concerns for most researchers worldwide. Alternate Clean energy, notably one of the most important aspects of the upcoming future, is being tried and tested as one of the primary fuels for vehicles. Therefore, a solar car can be the next big creation of future technological advancement. After successfully harnessing the power of solar energy to generate electricity, experts worldwide have been trying to utilize it once again to power cars. 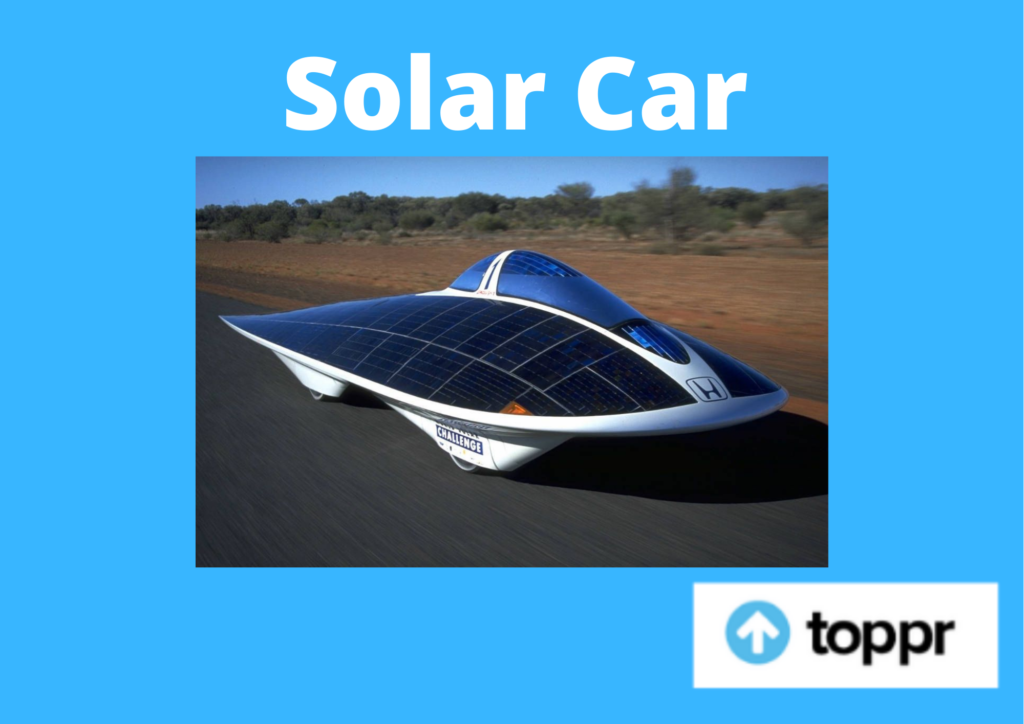 Definition: We refer to a vehicle running on electricity produced by conversion of solar power into usable energy is as a Solar car.

Solar cars are an ingenious combination of aerodynamics, clean converted energy, and laws of motion. The end product is a means of transportation that leaves a minimal footprint. Moreover, it saves the environment as well as the monetary expenses.

Solar panels with built-in Photovoltaic cells help in the conversion of solar power into usable electricity that can be stored in batteries. Hence, we can use these batteries as the fuel which we require to run the vehicles.

Key Distinction between a Solar car and a Standard Car

However, Petrol, diesel, etc are fossil fuel that generates a huge amount of additional carbon compound gases like Carbon Monoxide and Nitrogen Oxide among a few others too. These gas remnants along with the pollutants in the fossil fuels are the reason for the extensively growing air pollution seen worldwide.

A solar Vehicle solely depends on the photovoltaic cells to absorb the sunlight and convert it into usable energy to power the engine. Photovoltaic cells bypass the original principal of solar thermal energy by converting solar energy directly to usable electricity instead of thermal conversion. Therefore, we can easily store converted electricity in the batteries and use them to power the engine of a vehicle just like a normal Electric Car.

Working Principle of a Solar car

Solar cars have solar panels custom-designed to be mounted on the surfaces receiving maximum sun rays, which is generally the rooftop. The photovoltaic cells on the solar panels comprise of Silicon and a combination alloy of Galium and Indium and Nitrogen gas.

These elements have a natural retentive property that allows them to absorb the light energy from the solar rays. The retained energy then releases in form of free-moving electrons into specially designed storage sections.

In fact, we refer to this storage facility as batteries. They comprise of special elements like Lithium-ion, and Nickel – Cadmium, etc. These batteries have the ability to convert free electrons into usable energy to power the vehicle engine.

The speciality of these batteries is that we can use them repeatedly to power a vehicle. We can do it by recharging them using solar energy. With an ability to generate 80 to 150 volts of energy, solar-powered cars can cover 60 to 90 km on a single full charge.

The best aspect of these Solar Cars is their ability to constantly keep recharging their battery even when parked idle under sunlight. Therefore this reduces the cost of operation of a car to almost negligible.

Parts of a Solar car

Use of Solar cars

Solar cars have a wide application range that includes:

Solar Powered vehicles have the potential to change the future for the better. The concept of harnessing the immense power of sunlight into a constant source of energy can create a very big impact on the global scenario.

However, since this is still a theoretical concept mostly, it holds a lot of drawbacks like

Question 1: Can we charge a solar car during heavy rain?

Answer 1: The presence of sunlight regardless of the rain or clouds is sufficient to generate converted electricity for the batteries of the solar-powered cars.

Question 2: What do we use solar cells?

Question 3: Why are there no Solar Powered cars available?

Answer 3: Solar cars are still in their conceptual state. However, Lightyear One, one of the recent most Long-range solar-powered cars conceptualized by a Norweigian Automobile firm is the closest full-fledged family car to be designed as of yet.