The gaseous state is the most simplified state of matter. Gas is highly compressible in nature, however, it has a uniform distribution of pressure on all sides. Being shapeless and without any fixed volume, they take the shape of the container they are placed into. Additionally gas is very easily mixable due to the negligible interaction of the intermolecular forces.  The characteristic trait of all Gases is mainly governed by a few sets of laws. These laws were derived on the basis of the experimental studies conducted on the behavioural pattern of gas under various conditions like pressure, temperature, and volume. Further, we will study about gas constant in detail. 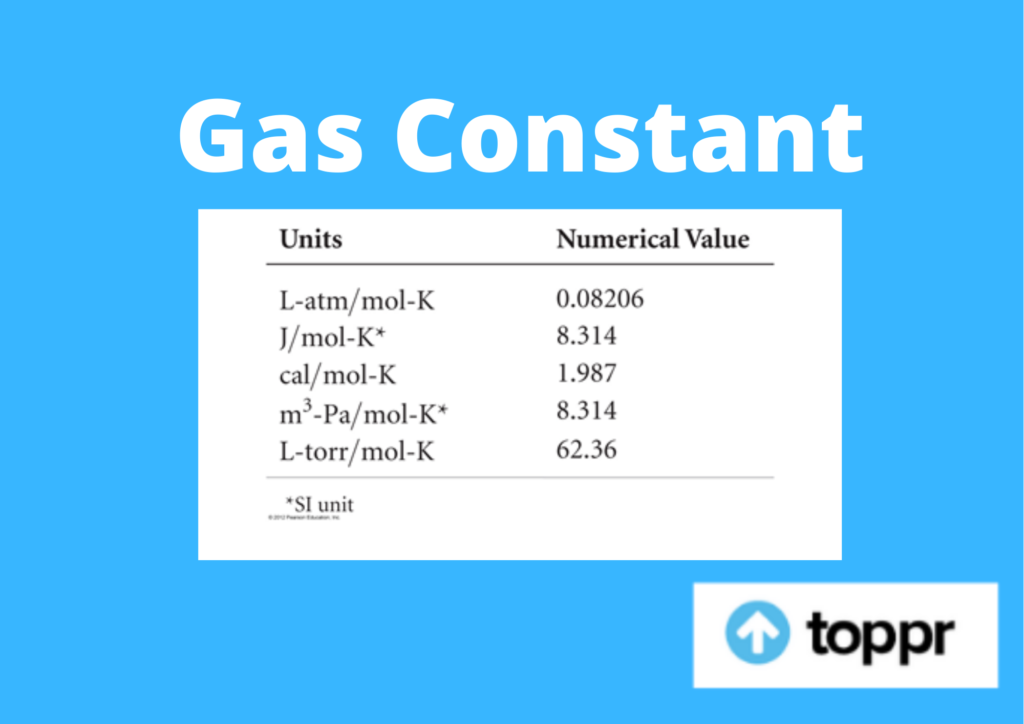 Definition: Gas constant is the general constant in an equation of a gaseous state which is equivalent to the product of the pressure and volume of one mole divided by absolute temperature.

Gas constant is also referred to by other scientific names like Molar Gas Constant, Universal Gas Consent, and Ideal Gas Constant. It is denoted by the symbol R. Gas constant is similar to Boltzman constant, however, it is represented in energy per degree temperature increment per mole.

However, in the case of the Boltzmann constant instead of mole value (product of volume and pressure) particle value is used.

Gas Constant is an important relatable factor of numerous laws and Principles of Physics. It is used as a combination constant in various laws and as fundamental factors in equations.

It is a combination of Boyle’s Law, Charles Law, and Avogadro’s law.  However every gas has its own innate features and properties, so it is difficult to acknowledge all the gases under these 3 laws. Therefore an ideal gas that combines the 3 laws, as well as binds with the structural integrity of all gases, is considered the specimen data for analysis.

An Ideal Gas is a theoretical representation of a gas that is composed of point particles that do not show any changes during intermolecular movements. This gas represents all the 3 primary laws as stated by Boyle, Charles, Gay Lussac and Avogadro

Finally, from Avogadro’s Law – V ∝ n where T and n are constant

Thus combining all will give us V ∝ n X T/P

Therefore, mathematically we can express it as:

n stands for the amount of substance

An Ideal gas equation occurs when all the 3 laws can be combined together in a single equation. It is referred to as the relation between four variables and it describes the state of any gas, therefore, it is also called the equation of state.

As mentioned before Gas constant is a combination of various laws that results in the final value of R (gas constant).

However, PV= RT is only valid under low temperatures.

For dilute gas, the equation will be

PV = μRT where μ denotes the number of moles in the given quantity of sample gas. With increasing pressure, on a constant volume of gas, the temperature change can be seen is in a linear manner. This is known as the Absolute Temperature.

The representation unit of R is energy per mole per Temperature. The value of R is directly dependent on the units of measurement of P, V, and T. Thus, if the value of the 3 is known, calculating R is also possible.

Therefore as per the SI Unit, the standard value of R is 8.314 joule/mole/kelvin

As energy is represented using various other terms also, therefore the value changes from joules to calories also in some other format.

The Dimensional Formula of Gas Constant

Gas constant has a specific dimensional formula that is represented as

The product of Pressure and Volume is equivalent to the product of total mole, temperature, and the Gas Constant

Therefore, Gas Constant is equal to the product of pressure, and  volume  along with the inverse value of  total mole and temperature

Question 1: What is an Ideal gas?

Answer 1: Ideal Gas is a theoretical representation of a gas that is composed of point particles that do not show any changes during intermolecular movements.

There are three types of Ideal gas:

Question 3: What is Avogadro’s Hypothesis?

Answer 3: Avogadro’s Hypothesis states that ‘for a given mass of an ideal gas, the volume of gas is directly proportional to the amount (mole) of gas when the pressure and temperature are constant.’

Avogadro’s Hypothesis is one of the primary factors for determining the Ideal Gas Constant.