Levers are simple kind of machines that consists of a beam or rigid rod that is pivoted at a set hinge or fulcrum.

A lever is a rigid body that is capable of rotating at a point on itself. On the basis of the fulcrum’s location, load, and effort, the lever is divided into a number of three types.

It is one of the simple 6 machines that the Renaissance Scientists have given identification to. A lever has an input force for giving a huge output force.

However, it provides leverage also. The ratio of the output force to the input force is basically the mechanical advantage of the lever.

Firstly, Levers are different from each other in many ways, but all have a few components. They all consist an arm, a straight, relatively an inflexible part, like the handle of an axe or we can say the entire length of a see-saw. It also needs to be unbreakable, durable and relatively unbendable. They also have a fulcrum as well. 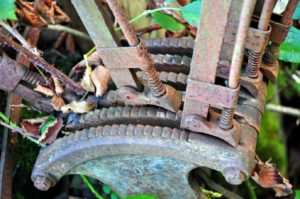 Moreover, on a fulcrum or a pivot, the liver rests and pivots. A basic lever is basically a see-saw, where the board sits is an arm. The pivot on which the boards sits is basically a fulcrum. However, the contact point between the see-saw and the ground is the load.

Class 1 Lever: A class 1 lever has the fulcrum in between the effort and load. The movement of the load is present in the opposite direction of the movement that occurs because of the effort.

This is the most common configuration of a lever. The effort in a class 1 lever is almost in a single direction. Here the load moves in the opposite direction. For example, teeter-totter, oars on a boat and catapult.

Class 2 Lever: A class 2 lever has its load between the fulcrum and the effort. In these kinds of levers, the movement that happens due to the load is in the same direction as that of the effort.

Notably, the length of the effort arm goes all the way to the fulcrum and is mostly greater than the length of load arm in a class 2 type of lever. The load in a class 2 lever goes to the same direction as the effort. For example, Wheelbarrow, Crowbar, and a nutcracker.

Also, the load present in a class 3 lever goes in the same direction where the effort goes. Due to the location of the effort with respect to the fulcrum. For example, Mousetrap, broom and hockey stick.

The earliest evidence of the mechanism of the lever dates back to over 5,000 years ago. It was used for the first time on a simple balance scale. A crane-like structure that we use for lever mechanism.

It is evident from the recesses in the large blocks and the handling bosses that could not be applicable in any purpose other than that of the levers.

Ques. A right-angled bell-crank raises a load of 5kN at short arm whose length is 100mm. The longer arm is of length 500mm. Calculate the reaction of the force that is acting on the fulcrum.

Share with friends
Previous
What is Inertia?
Next
Pulley System - How Does it Work?