There are many types of rocks which we grow up studying. It might get confusing to remember which type of rock is called what so we will begin with the basics first. Rocks form naturally when the tiny grains of different minerals get compressed because of the pressure which exerts on them. Moreover, they are also exposed to heat which causes this compression. Further, there are different procedures which form different kinds of rocks. The main types of rocks are Igneous rocks, Sedimentary rocks and Metamorphic rocks. In this article, we will go through igneous rocks and types, formation, characteristics and more. Thus, it will help you get a better understanding of these rocks. 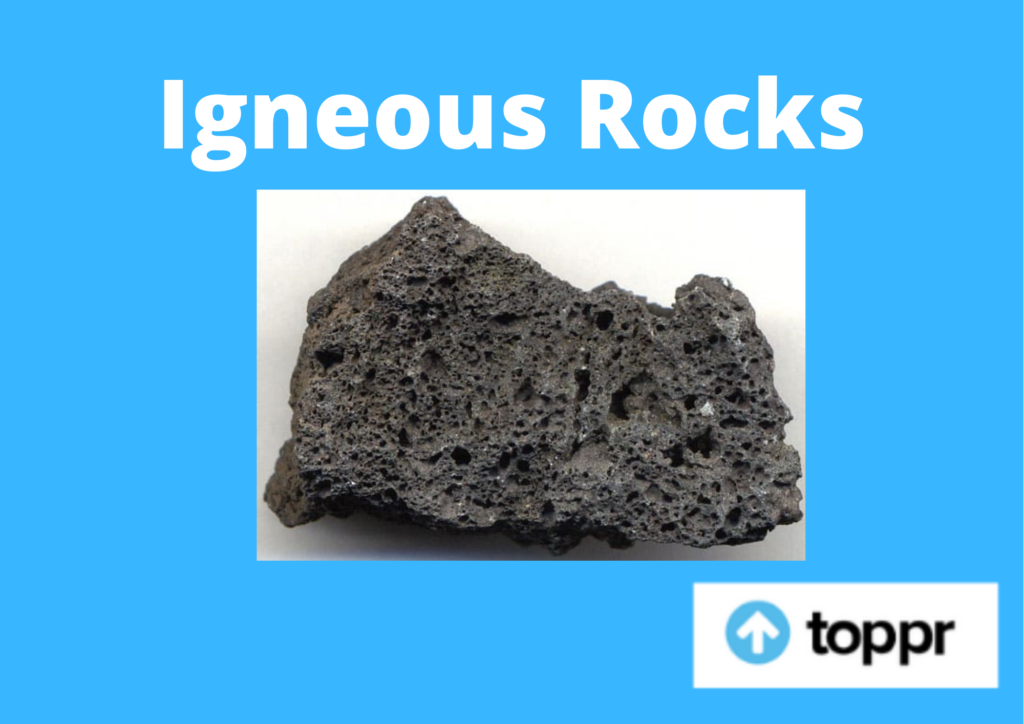 We define igneous rocks as the kind which form when molten rock cools down to a solid-state. Molten rock refers to the rock which liquefies due to intense heat and pressure. Further, lava is the molten rock which flows out of fissures or vents at volcanic centres.

After that, they cool down and form rocks like basalt, rhyolite, or obsidian. Pyroclastic deposits are accumulations of fragmented material which eject during volcanic eruptions. For instance, ash, bombs, tuffs and volcanic breccias.

We can easily identify igneous rocks because of their texture, density, colour and mineral composition. The texture of these rocks is dependent on the shape, size, time period for cooling down and solidifying and the arrangement of crystals in the rock.

In other words, the texture is like a description of the constituent parts of the rocks with reference to the sizes, shapes and arrangement. Further, the size of mineral crystals in an igneous rock can denote the rate at which the lava or magma cooled to create a rock.

These are the kind of rocks which crystallize below the surface of the earth. Thus, they result in large crystals as the cooling process happens very slowly. The examples of these rocks are diorite, granite, and pegmatite.

These are the kind of rocks which erupt onto the surface which results in small crystals as the cooling happens very rapidly. The cooling rate for some of the rocks is so quick that they create an amorphous glass. The examples of these rocks are basalt, tuff, and pumice.

In order to understand what igneous rocks are, let us take a look at their examples, they are:

Firstly, the igneous form of rocks does not include any fossil deposits. Moreover, even if there are any chances of fossil deep inside the crust, it erupts out of the surface of the earth and gets destroyed because of the sheer heat which these rocks produce.

Further, most of the igneous forms include more than one mineral deposit. In addition, they can either be glassy or coarse. Similarly, these rocks do not generally reach with acids. Finally, the mineral deposits are available in the form of patches with different size.

There are basically seven types of igneous rock textures. They are Aphanitic, Phaneritic, Pegmatitic, Porphyritic, Vesicular, Pyroclastic, and Glassy. The fine-grained which is less than 1 mm is Aphanitic. You cannot see the grains with the unaided eye.

Next, vesicular refers to rocks having vesicles. Basically, it resembles a sponge and the examples are scorcia and pumice. Pyroclastic is fragmented, angular grains which are ejected during the eruption. For instance, volcanic breccia.

Finally, we have a glassy texture. When the lava cools down quickly, there is not enough time for the formation of large minerals. The example of this texture is obsidian.

Igneous and metamorphic rocks make up around 90 to 95% of the top 16 km of the crust of the earth by volume. Further, igneous rocks form around 15% of the current land surface of the Earth.

Similarly, most of the oceanic crust of our Earth is composed of igneous rock. Thus, you see that these rocks are important geologically. Firstly, their minerals and global chemistry provide information regarding the composition of the mantle, from which we extract some igneous rocks and the temperature and pressure conditions which allowed this extraction, and of other pre-existing rock that melted.

Secondly, their absolute ages which we can obtain from different forms of radiometric dating and thus, we can compare it to adjacent geological strata which enables a time sequence of events.

Thirdly, the features of these rocks are generally characteristic of a particular tectonic environment which allows tectonic reconstitutions.

Question 1: What is the etymology of the term igneous rock?

Answer 1: The word “igneous” has been derived from the Latin ignis, which means “of fire”. Volcanic rocks are named after Vulcan, it is the Roman name for the God of fire. We also refer to intrusive rocks as “plutonic” rocks, named after Pluto, who was the Roman god of the underworld.

Question 2: What are extrusive igneous rocks?

Answer 2: These are the kind of rocks which erupt onto the surface which results in small crystals as the cooling happens very rapidly. The cooling rate for some of the rocks is so quick that they create an amorphous glass. The examples of these rocks are basalt, tuff, and pumice.