Now, it passes through its mean position but doesn’t stop. It moves towards its other extreme position. After which, it again returns to its equilibrium position. One such complete motion is known as an Oscillation. The motion of a simple pendulum is a great example of simple harmonic motion. 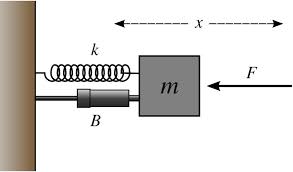 Let’s derive the force law for simple harmonic motion with an example. A spring-block system is the simplest example of simple harmonic motion. Consider a block of mass m attached to a spring, which in turn is fixed to a rigid wall. The block rests on a frictionless surface. When we do not pull the spring, that is, no force is applied on it, it is in its equilibrium position. In this state, the net force acting on it is zero. Now, let’s perform two actions and observe what happens.

In both the cases, we can see that there is a force acting on the block that tries to return the block to its equilibrium position. This force is the restoring force and the force law for simple harmonic motion is based on this force. Let’s learn how to calculate this law.

where k is a constant known as the force constant.Its unit is N/m in S.I. system and dynes/cm in C.G.S. system. The negative sign indicates that the restoring force and the displacement are always in opposite direction. The equation I is the simplest form of force law for simple harmonic motion. It proves the basic rule of simple harmonic motion, that is, force and displacement should be in opposite direction.

Further, we know that F = ma. Therefore, a = F/m. Substituting this value in Equation I, we get,

Hence, Equations I and II are the forms of force law of simple harmonic motion. Note that the restoring force is always towards the mean position and in the opposite direction of that of displacement.

Q1: A hydrogen atom has mass 1.68×10−27 kg. When attached to a certain massive molecule it oscillates with a frequency 1014 Hz and with an amplitude 10−9 cm. Find the force acting on the hydrogen atom.