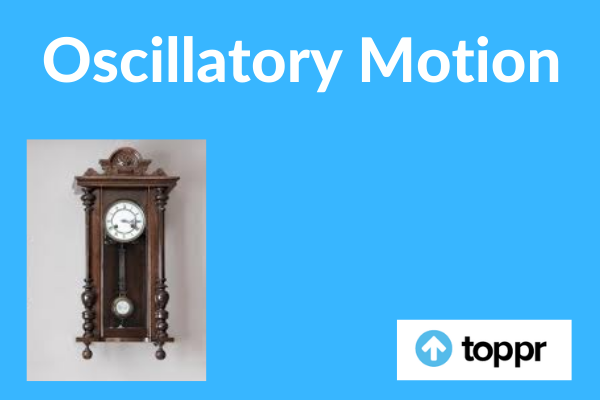 What is Oscillatory Motion?

When any object moves over a point repetitively then this type of motion of the object is the Oscillatory Motion. In the complete vacuum, the ideal condition can be approached as air will not be there to stop the object in oscillatory motion friction.

In linear motion, the object moves left and right or up and down. Some examples of this type of linear motion are as below:

In the circular motion, though the object moves left to right but in circular form. Some examples of this type of motion are as below:

A simple form of oscillatory motion is Simple Harmonic Motion (SHM). In this motion, the restoring force is directly proportional to its displacement from its equilibrium position. This is Hooke’s Law.

Hooke’s law can be explained with the help of the following example. Suppose a block of mass m is tied up with long spring (with spring constant k) at one end and its other end is fixed on the wall. When the block moves away from the wall horizontally, spring tries to restore and due to this oscillatory motion starts. The restoring force which tries to restore the deformation of spring can be expressed by Hooke’s law which is,

\(F_{s} = – k x\), the negative sign shows that the force is acting against the displacement x.

When the block is displaced to a position, x = A, and released, the restoring force will try to regain its equilibrium position. But when black reaches at its equilibrium position (x = 0) its potential energy converts to kinetic energy and this kinetic energy overshoots the block to another side of the equilibrium point until x = – A. from this point, block moves to right again and takes the position x = A. this way the motion continues until the friction force starts acting to stop the block. This frictional force equals to the restoring force. Thus, from Newton’s second law frictional force is

Where, \(\omega =\sqrt{\frac{k}{m}}\), which is the natural angular frequency of the system. The general solution of the above equation is

Then the above equation will become

Using the trigonometrical identity, sin (A+B)=sinAcosB+sinBcosA, we get

So, it can be said that the oscillatory as well as periodic motion can be represented in terms of sine and cosine functions. Where D and \(\alpha\) are constant and are equal to

FAQs on the Oscillatory Motion

Q.1: What is an oscillatory motion and equilibrium point?

Answer: An oscillatory motion is a motion in which the object moves in such a way that it comes to and goes from a fixed point periodically. This fixed point is the equilibrium point. The equilibrium position of the oscillatory motion is the position about which the oscillations occur and in each oscillation, it is mandatory for the oscillating object to pass through this point. Example: electromagnetic waves, alternating current circuits, and molecular motion.

Q.2: How does oscillatory motion differ from periodic motion?

Q.3: What are the types of oscillatory motion?

Answer: There are two types of oscillatory motion.

Answer: According to Hooke’s law, “the restoring force is directly proportional to the displacement from the equilibrium position”.

On a horizontal plane, a spring tied a block and fixed to the wall and block is put in such a way that it can move horizontally. When the block moves away from the wall horizontally, spring tries to restore and due to this oscillatory motion starts. The restoring force tries to stop the spring from deformation. This restoring force is given by

\(F_{s} = – k x\), the negative sign shows that the force is acting against the displacement x.

This is Hooke’s law.