A photodiode refers to a PN-junction diode that consumes light energy for producing an electric current. We also refer to them as a photo-detector, a light detector, and a photo-sensor. They have been designed to work in reverse bias conditions. The typical photodiode materials are Silicon, Germanium, and Indium gallium arsenide. In this article, we will study in detail photodiodes applications. 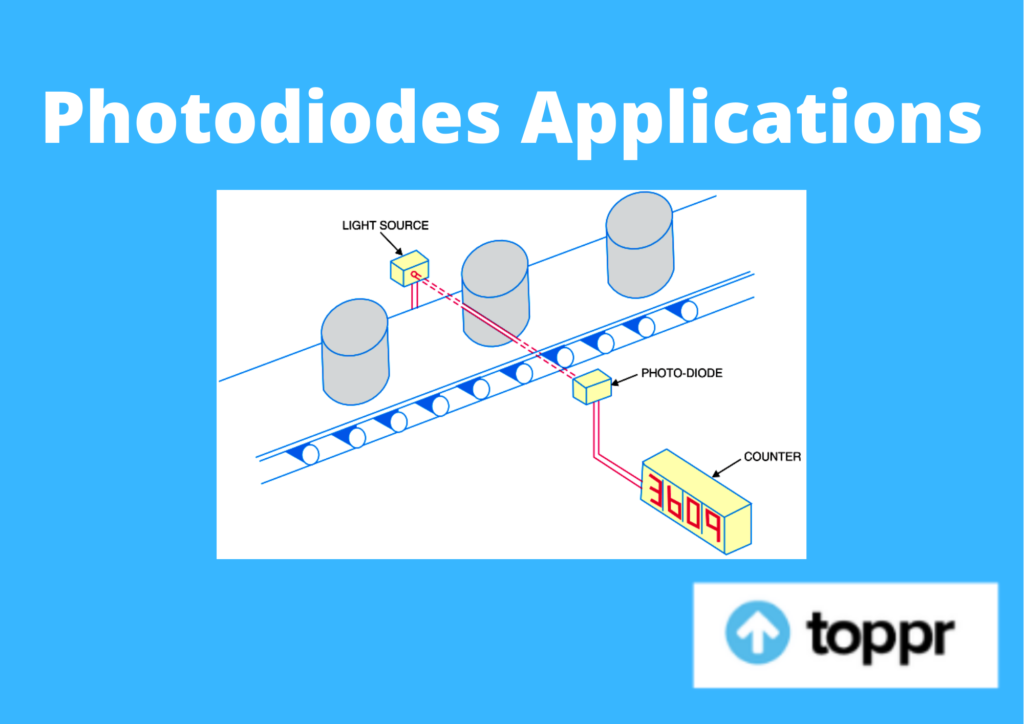 Due to the increase in the number of electrons on the n – side, and holes on the p-side, one can observe a rise in the electromotive force. Now, when an external load connects to the system, we observe a current flow through it.

This consequence of the proportional change in photocurrent with the change in light intensity can be simply detected by applying a reverse bias. Moreover, as photodiodes produce current flow directly depending upon the light intensity they receive, we can use them as photodetectors for detecting optical signals.

Similarly, we can also use built-in lenses and optical filters for enhancing the power and productivity of a photodiode.

This is the symbol of the photodiode:

This symbol is similar to that of an LED, but you will notice that the arrow her is pointing inwards.

We will not study the applications of photodiodes:

Question 1: Why are photodiodes used in reverse bias?

Question 2: What are photodiodes and mention its application?

Answer 2: We use photodiodes in safety electronics like fire and smoke detectors. We also use them in many medical applications. Moreover, we use them in instruments that analyse samples, detectors for computed tomography. Similarly, we also use them in blood gas monitors and in solar cell panels.

Question 3: What are the advantages of a photodiode?

Answer 3: There are many advantages of a photodiode. Some of them are that it is linear and has low resistance. Further, it has a very good spectral response. Moreover, its frequency response is also better in addition to having a low dark current. It is the fastest photodetector and has a long life in addition to having low noise.