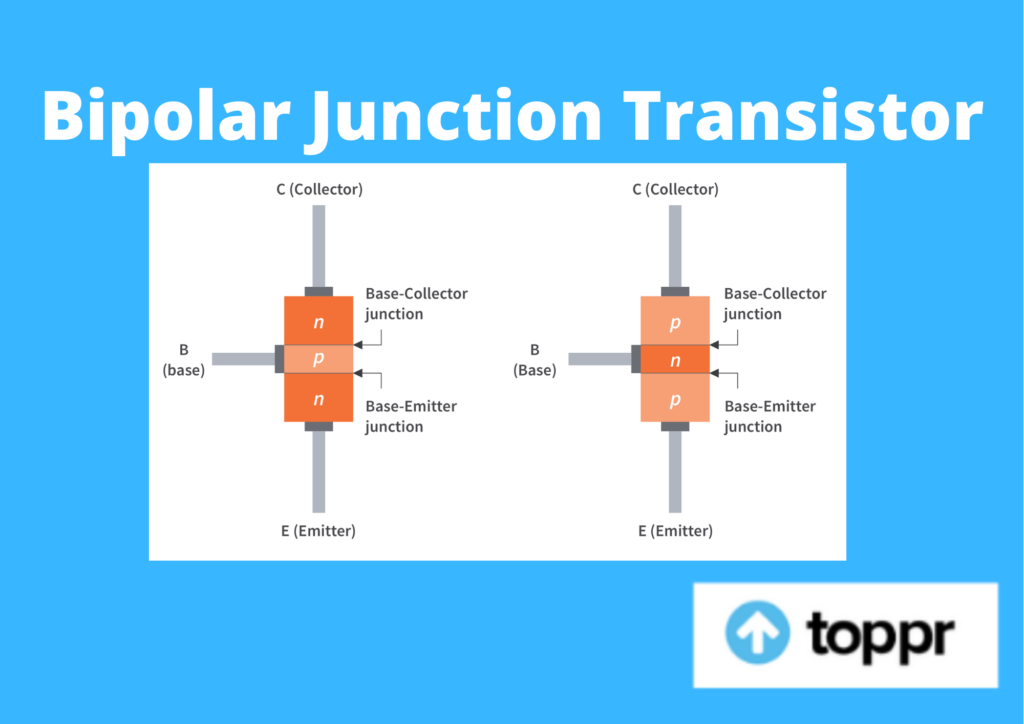 The bipolar junction transistor is a current-controlled and 3-terminal semiconductor device. Moreover, it consists of two p-n junctions. These junctions magnify the signal. Further, the three terminals are collector, base, and emitter. The signal of less amplitude applies to the base becomes available in the amplified way at the transistor collector. It doesn’t need an external source like DC for carrying the amplification.

It composes of three doped semiconductors like a collector, base, and an emitter that separate by 2 p-n junctions. The transistors prepare in two ways- NPN and PNP. They are available in large quantities and as distinct components. The key purpose is to magnify the current. We can use them as amplifiers or switches. Moreover, we widely use them in other devices such as mobile, radio transmitter, television, and industrial control.

There are three regions of operation in bipolar junction transistor

Active region- It is the region where the transistor remains functional as an amplifier.

Saturation region- It is the region where the transistor is on and functions as a switch. The collector current is equivalent to the saturation current.

Cut-off region- It is the region in which the transistor is off and the collector current is zero.

Mainly there are two kinds of bipolar junction transistors- PNP and NPN.

Another important aspect to consider is that the transistor is biased in an accurate manner. Failure to do so can result in issues like

Moreover, one must not confuse BJT with MOSFET as both are separate entities. While BJT is a bipolar Junction Transistor with three terminals called as Base, emitter and collector. Further, MOSFET is a metal oxide based semiconductor Transistor with terminal called source, drain and gate.

Function of the Bipolar junction Transistor

The charge flow is due to the diffusion of charge carriers. The regions are collector, base, and emitter. The emitter is highly doped. The base and collector have the same concentration of charge carrier. The base-emitter junction is forward while the base-collector is reverse biased. The forward biased is p-doped and has more potential as compared to the n-doped one.

Further, always remember that there is a fixed maximum limit of a transistor of any kind, the collector supply voltage.  Any over the limit charge can damage the transistor.

We generally use BJT as a switch, filter, amplifier, and oscillator.  Additionally, we also apply it as an amplifier in electronic signals. Thus, we can also use it as a component of Modulator.

Answer 1: BJT was a joint discovery by Brattin, Bardeen and Shockley

Question 2: Which are common operating region of a Bipolar Junction Transistor?

Answer 2: The key region of operation of BJT are

However, FET is much easier to fabricate and is much more temperature stable that BJT.

Share with friends
Previous
Wheel And Axle
Next
Ceramic Capacitor