Between the mid-1950s and the late 1960s, the healthcare industry was on verge of a massive transition with the developing research on x-rays and gamma rays. However, the complication of developing a commercial detector was much more difficult than the theoretical analysis. CdTe crystals showed a very fluctuating result until the introduction of Schottky Diode as a surface barrier. Nevertheless, Takahashi created an enhanced version by adding stacked detectors to the Diodes.  In fact, this was how Schottky Diode became an integral part of the X-ray detectors. Cat’s whisker demodulator used in the extraction of audio modulations during the early 20th century is believed to be the predecessor of the modern-day Schottky Diode. 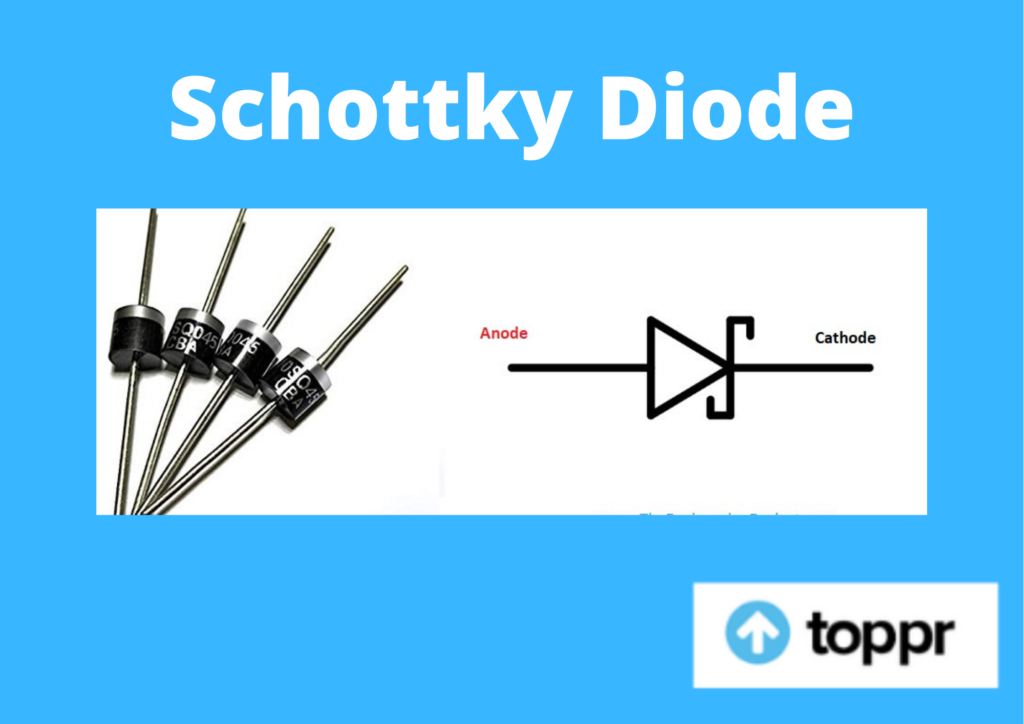 For example, the typical P-N diode has a relatively higher forward voltage ranging between 600 to 700 mV. In the case of Schottky Diode, the forward voltage is dropped by over 70 per cent. On average, the general forward voltage produced by Schottky DIode ranges between only 150 mV to 300 mV at the maximum.

Schottky Diode is primarily known for the fast rate of switching and reduced forward voltage drop. Additionally, the junction between the metal electrode and the semiconductor does not have a depletion layer which makes it impossible for the diode to store additional charges at the junction like in case of P-N diodes. Hence the current flow through the diodes directly each time there is a voltage drop.

Structure of a Schottky Diode

Schottky Diode is constructed out of metallic electrodes that are connected to an N-type semiconductor. As mentioned above, rather than the conventional P and N-type types, these metal electrodes prevent depletion of layers. Henceforth, this creates a stable unipolar device which is far more stable structurally than the conventional Bipolar devices.

We denote the metallic end as Anode and the N-type semiconductor as the Cathode. Furthermore, this creates a single pathway of current flow from the Anode (metal) to the Cathode ( semiconductor) with no backflow at all.

However, the higher current flow produces a very small forward voltage drop of Vf less than 0.3 to 0.45 V.

The forward voltage drop of every metal-silica compound differs from each other on the basis of the conductivity of the said metal. It generally fluctuates between 0.3 Volts to 0.5 Volts.

We know that an atom which receives an extra electron becomes a negative ion while the atom that loses an electron becomes a positive ion. Similarly, in case of a Schottky Diode, the free electrons in the semiconductor move towards the metal anode to create a balance between both the operation ends.

We use it widely in the Electronics and Electrical appliances, we regard it as one of the key inventions of this era. Some of the most common use of the Schottky Diode includes –

Question 1: What is the difference between Schottky Diode and PN diode?

Question 2: Why do we call the Schottky diode a hot-carrier diode?

Question 3: What are the uses of a Schottky Diode?

Answer 3: Schottky Diodes are primarily used as RF mixers, Power rectifiers etc. the primary characteristic feature of Schottky Diode is its ability to reverse from a state of conduction to a state of blocking. Therefore, this makes it very useful in areas of low turn-on voltage.

Question 4: What is a Schottky Rectifier?

Answer 4: Schottky Rectifier is a semiconductor diode primarily consisting of a metal and semiconductor combination junction. Further, the low forward voltage drop combined with the fast switching speed makes it one of the most preferred and reliable rectifiers used.