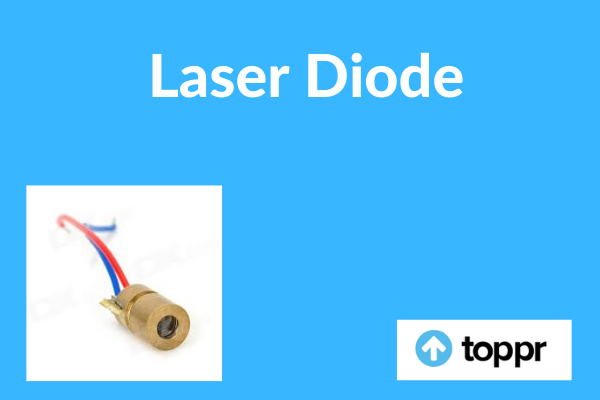 How does a Laser Diode work?

There are three basic phenomena from which the atom can emit light energy.

The laser diode consists of a p-n junction where there are holes and electrons. (Here, a hole is, the absence of an electron). When a specific voltage is applied, at the p-n junction, the electrons absorb energy and transfer to a higher energy level. And in the original position of the excited electron, holes are formed. The electrons live in this exciting state without merging with holes for a short period, referred to as “recombination time” or “upper-state life.” The recombination time for most laser diodes is around a nanosecond.

After the life of excited electrons in the upper-state, they recombine with holes. When electrons fall from a higher energy level to a lower energy level, the energy difference converts into photons or electromagnetic radiation. This same method generates light in LEDs. The difference between the two energy levels determines the frequency of the emitted photon.

The input terminals are attached to metal plates sandwiched to n-type and p-type layers. This type of laser diode is the “Homojunction Laser Diode.” The intrinsic zone between p- and n-type material is used to increase the volume of the active region so that more holes and electrons can accumulate at the junction. It causes more electrons to recombine with holes at any moment, resulting in improved output power. The laser light emits out of the elliptical region. This beam from the laser diode can further be focused using an optical lens. This entire PIN diode (P-type, Intrinsic, N-Type) structure is enclosed in a metal structure.

There are several types of laser diodes, such as:

There are two categories of the laser diode.

Injection Laser Diode: This is similar to LEDs except, LEDs use large channels of semiconductors while laser diodes use narrow channels. In this, the light beam passes through the waveguide, and the diode itself serves as a waveguide. The continuous stimulated emission intensifies the light beam.

Optical Pumped Semiconductor Laser: In this, the injection laser diode serves as an external pump. The semiconductor materials of the III & V  group serves as a base. The amplification is performed by stimulating emission. It provides some benefits, such as the preventing interference caused by the structure of the electrode. It also gives a good wavelength selection.

Autonomous Vehicles: Laser diode technology is useful in the development of LIDAR devices for autonomous driving.

Commercial Applications: As means of a high-intensity laser beam for the accurate cutting of materials. They are also useful for 3D printing to soften the substrate.

Q1. What are the advantages of Laser Diode?

Answer. The advantages of Laser Diode are:

Q2. What are the disadvantages of Laser Diode?

Answer. The disadvantages of Laser Diode are: