The name comes from a very famous scientist belonging to Austria Ludwig Boltzmann. Boltzmann constant is now one of the seven ‘defining constants’ that have been provided precise definitions. This was brought about in the ‘2019 redefinition of SI base units. These defining constants are used to form the seven SI base units through various combinations. The value of the Boltzmann constant is 1.380649×10−23 J⋅K−1. 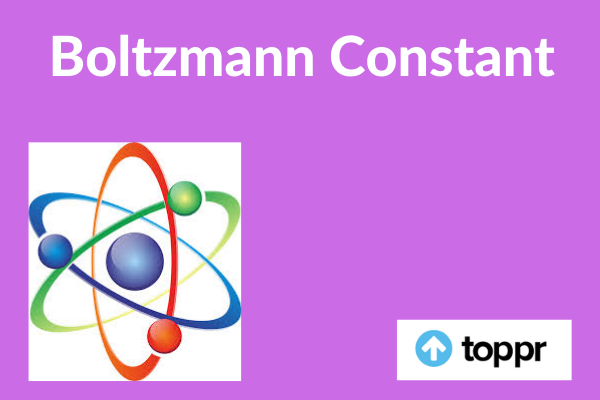 Table of content
1 Equipartition of Energy
1.1 Entropy in the Statistical Form
1.2 Boltzmann Factors and the Thermal Voltage
2 FAQs about Boltzmann Constant

The average thermal energy possessed by each microscopic degree of freedom in a thermodynamic system at an absolute temperature T is:

This at room temperature gives a value of 2.07 x 10-21 J. This average thermal energy is supposed to exactly hold for ideal gases homogeneous in nature on the basis of classical statistical mechanics. Every atom of the six noble gases present which are denoted as the monatomic ideal gases possesses three degrees of freedom. These three directions are corresponding to the three directions in space. This leads on to thermal energy of:

The root Mean square velocity of the atoms can be calculated using this thermal energy. This speed comes out to be inversely proportional to the square root of their atomic masses. The varying root Mean square velocities for noble gases range from 1370m/s for helium to 240 m/s for xenon. This trend reflects on the relation of root mean square speed with the atomic masses of the elements.

The pressure for an ideal gas is provided by the Kinetic theory of gases as:

The ideal gas law states that

When we combine these two equations, we can calculate the average translational kinetic energy which is

When we consider the translational velocity as a vector v which has three directions in space. We know that it has three degrees of freedom. Thus, the average energy per degree of freedom is one-third of that energy.

Now, the ideal gas equation is not limited to only six monatomic inert gases. It is also applicable for molecular gases, but the calculation of the heat capacity is more complicated. This is because the additional internal degrees of freedom are present in the molecular gases. This facilitates the movement of the molecule as a whole. For example, diatomic gases possess six degrees of simple freedom per molecule. These degrees of freedom are related to the translational, rotational and vibrational motion of the molecule.

Entropy in the Statistical Form

The thermal energy of a system per unit temperature which is unavailable for performing useful work is known as the entropy of a system. In terms of statistical mechanics, at thermodynamic equilibrium, a system possesses entropy S which is denoted as the natural logarithm of W. This gives the number of distinct states available for a system under specific microscopic constraints. Constraints can be of a variety, for example, the fixed total energy of the system.

This equation represents the central idea of statistical mechanics. It gives the relation between the microscopic details of a thermal system to its macroscopic state using the entropy. The importance of this equation can be judged by the fact that Boltzmann’s tombstone has this equation inscribed on it.

The Boltzmann constant is the proportionality constant which serves to make the classical entropy of Clausius equal to the statistical mechanical entropy.

When entropy is observed as a dimensionless property indicating microscopic properties, it can be:

Shannon’s entropy corresponds to this form of entropy. It is more natural and rescaled to give information entropy. Nat is the unit for information. Thus, kT becomes the energy responsible for 1 nat increase in the rescaled entropy of the system.

Boltzmann Factors and the Thermal Voltage

Here Z is the partition function. A partition function is a statistical model consisting of thermodynamic state variables such as volume and temperature. They describe the statistical properties of a system. In this system also, kT supposes energy-like importance. Arrhenius equation present in the chemical kinetics is the result of this factor.

To define the relationship between the electrostatic potential and the flow of electric current in a semiconductor across a p-n junction. We need to use the Shockley diode equation. This equation depends on a characteristic voltage known as the thermal voltage. This voltage is denoted by the symbol VT. The dependence of the thermal voltage on absolute temperature takes use of the Boltzmann constant.

where q is the charge on the electron

k is the Boltzmann constant

T is the temperature

The charge q is numerically equal to 1,6 x 10-19C. This equation can be modified to give

Q.1. How does the value of Boltzmann constant change in different units?

Q.2. What is the Maxwell Boltzmann distribution?

Answer. It is a probability distribution which indicates the speed of various particles of a system at a specific temperature kept stationary in a particular container. It is a graph between the speeds of the particles and the number of particles possessing that speed in the system.

Q.3. How is the value of Boltzmann constant measured?