Kelvin Planck Statement states that it is impossible to construct an engine whose only purpose is to facilitate the conversion of the heat from a source/reservoir of high temperature into an equal amount of work. Moreover, as far as the second law of thermodynamics is concerned, this is a special case.

The Kelvin–Planck statement is also known as the Heat Engine Statement. This statement is part of the second law of thermodynamics and tells us that it is impossible to devise a heat engine that can absorb energy in the form of heat as well as produce work of an equivalent amount. Under this concept, energy is from a single thermal reservoir and in the form of heat. 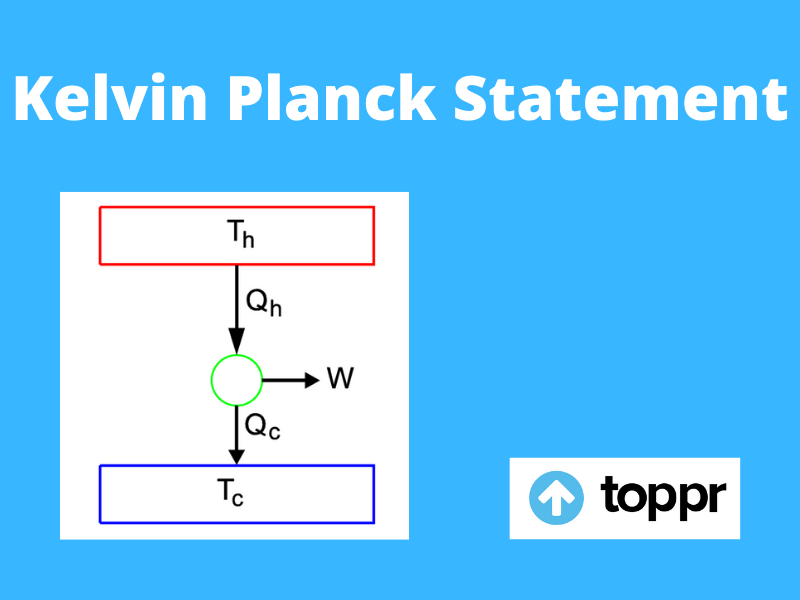 According to Kelvin statement, it is not possible by cooling below the highest cooling temperature of the surrounding objects to derive mechanical effect from any matter. Planck’s statement tells us that, for the reversible system, the total sum of entropies would remain constant. Most noteworthy, clubbing together both these statements gave birth to the Kelvin-Planck Statement.

An important point to remember is that heat (Q) and Work (W) happen to be the two forms of energy. Furthermore, both these forms are inter-convertible and both follow the S.I unit Joules. This means that the conversion of work can take place into heat and vice-versa.

Consider a hypothetical device known as Perpetual motion machine of the second kind (PMMSK). Furthermore, Wilhelm Ostwald introduced this device and it would perform work by absorbing energy from a body as heat. This way Wilhelm Ostwald has Kelvin-Planck Statement explained.

The efficiency of a heat engine is the amount of useful work that is obtainable for a given amount of input.

In general, efficiency is a good way of explaining the heat transfer process. Furthermore, it is the ratio of “how much gets out” to “how much gets put in”

In the absence of heat sink, that is:  QL=0, efficiency will be

So, that efficiency is 100%. This certainly is not true in accordance with the second law of thermodynamics. Consequently, no heat engine can be 100% efficient.

There certainly are plenty of real-life applications of thermodynamics. To move the boat, the conversion of heat energy takes place into work energy. Furthermore, the water body comprises a massive amount of heat.

So ideally the extraction of heat from the body can take place. Afterwards, one can convert it completely into propulsion, so as to work. However, it does not work in a practical scenario.

In order to move the boat in the forward direction, there is a requirement of a well-equipped engine with fuel. Moreover, this would serve as an external heat supply for propulsion functioning.

As such, we come to the realization that it is impossible to build an engine that can facilitate the complete conversion of heat from one reservoir into work. Most noteworthy, this aids the Kelvin Planck statement.

Question 1: What does Kelvin Planck Statement deals with?

Question 2: What is meant by Kelvin Planck Statement?

Answer 2: Kelvin Planck Statement tells us that it is not possible to come up with a heat engine that can absorb energy in the form of heat and produce work of an equivalent amount.