A.P. Or The Arithmetic Progression

A sequence of numbers in which the difference between consecutive numbers is a constant number forms an Arithmetic Series or an A.P. In an A.P. the difference between any two consecutive terms is given by a constant number ‘d’ that we call the common difference. For example, the series 3, 7, 11, 15, 19, … is an Arithmetic Progression with 3 as the first term and 7 -3 = 15 -11 = 19 – 15 = 4 as the ‘d’ or the common difference.

Examples Based on A.P.

Answer: Counting is not the thing you want to do here. In these types of questions, pick the lower number i.e. 2 and find the first number that is divisible by the number in the question ( 4 here). The first number that is divisible by 4 after 2 is 4 itself. So we have a starting point. Now each number divisible by 4 can be obtained from 4 by adding 4 or a multiple of 4 to our starting number. This will form an A.P. like 4, 8, 12, 16, … with a common ratio of 4 and the first term = 4. 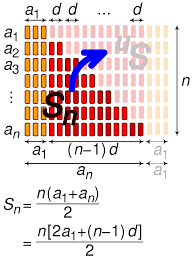 Example 1: An A.P. has 2 as the first term and 3 as the common difference. A two stage type series that begins with 7 and contains this A.P. will have, ____ as its fifth term.

Answer: The series is clearly a two stage type series. We can easily verify it by finding the difference between the consecutive terms and making a table from them as follows:

Q 1: How many two digit numbers are exactly divisible by 3?

Q 2: How many 3 digit numbers are exactly divisible by 4?