Whenever you are comparing two numbers, it becomes necessary to find out how many times is the one number greater than the other number. You can say that in other words, we need to express one number as a fraction of the other number. Usually, the ratio of a number x to a number y is defined as the quotient of the numbers x and y. The numbers used in the formation of the ratio are called terms of the ratio. The ratio is very often used to express as the percentages. To convert the ratio into a percentage we often multiply it by 100. 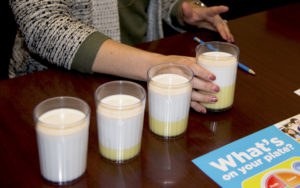 So, you can see that if the given numbers to you are in the different 10% range of each other than both of them can be easily comparable. But there can problems in comparison when both the given ratio are in the same 10% range. For example, 163/201 and 171/211 are the given ratios and the range for both the numbers fall in the same range i.e 80% and 90%. Then you need to compare them using 1% range. The first ratio is in the range of 81 and 82 while the second ratio is in the range of 80 and 81. The best way to go about this method is to master the rules of percentage.

Finding the Gap Between 3 or more Quantities

The above question is a classic example of the type of question asked in a competitive exam. It can be solved by two methods.

Method 1: The conventional method to solve the question.

Let’s start with the two values of Q, as they are common values given in the ratio. Thus 3 and 4 are those two values and take LCM of the values. The LCM will be 12. Now, convert Q’s value in each ratio to 12.

In method 1 the LCM given to you can become tiresome if the values are very high and thus it can become difficult to create a bridge between the three quantities.

2. Two men earn a yearly salary in the ratio 10:13. If there spending is in the ratio of 4:5 and the man spending lesser of the two saves Rs. 6000 while the other one saves Rs. 8000, then find the salary of the person who is higher paid.

3. If the ratio of the ages of Priya and Sunanda is 6:5 at present, and after fifteen years from now, the ratio will be changed to 9:8, then find the Priya’s current age.