A leaf is actually called ‘the kitchen of the plant’.  This is because they are the main organ responsible for photosynthesis, through which the plant produces its energy a.k.a. it’s food. They obtain their green color due to the presence of chlorophyll. Let us learn more about them.

Table of content
1 Suggested Videos
2 Leaf
2.1 Browse more Topics under Anatomy Of Flowering Plants
3 Parts of a Leaf
4 Types of Leaves
4.1 Based on Blade
4.2 Based on Shape of the Blade
4.3 Based on the presence or absence of the petiole (stalk)
4.4 Based on the serration on the edge of the leaf blade
4.5 Based on the arrangement of veins
4.6 Based on their arrangement on the stem
5 Structure of a leaf
6 Functions of a Leaf
7 Solved Example for You
8 FAQ’s for You

A leaf is the green, flat lateral outgrowth in plants. They come in different shapes, sizes, and colors, and are generally dorso-ventrally flattened and thin. They are the main organ responsible for photosynthesis as they contain chlorophyll.

Parts of a Leaf

Leaves have two main parts: The leaf blade and the Stalk or the petiole.

Some plants also contain another part called stipules. These are small flap-like structures that grow at the base of the petioles. They are protective in some plants when they protect the growing petiole while in others, they fall off once the petiole starts growing.

Do you know about SEED ?

Leaves can be classified based on many anatomic and morphologic features:

Based on Shape of the Blade

Want to know about Plant Tissues ?

Based on the presence or absence of the petiole (stalk)

Based on the serration on the edge of the leaf blade

Based on the arrangement of veins

Based on their arrangement on the stem

Structure of a leaf 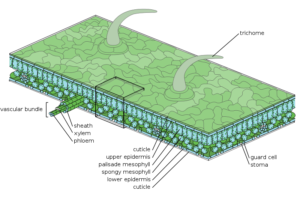 Each leaf consists of the following layers.

Learn more to understand the concept of Tissue here in detail.

Functions of a Leaf 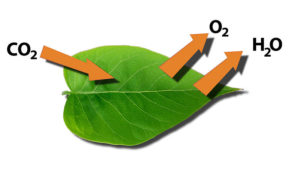 Q: Which structure of the leaves helps in gaseous exchange?

Sol: The correct option is  (a) Stomata

Stomata are small pores that are found in the lower epidermal layer of the leaf blade. They are regulated by the guard cells. The stomata help in regulating water intake and output across the cells and help in exchange or gases across them too.

Q1. The stalk of leaf is called
A. Sessile
B. Plumule
C. Stipule
D. Petiole

Answers: Petiole is the stalk of a leaf that attaches the blade to the stem. In petiolate leaves, the leaf stalk is long. It is the structure through which products of photosynthesis are moved from leaves to the entire plant.
So, the correct answer is ‘Petiole’

Q2. Main function of leaf is _____.
A. Transpiration
B. Exchange of Gases
C. Photosynthesis
D. Cooling

Answer: The main function of leaf is photosynthesis. It produces food for the plant. It has a photosynthetic pigment chlorophyll which converts solar energy into chemical energy. The leaf is also involved in the transpiration process. The transpiration process helps in cooling of plant. The exchanges of gases takes place through stomata present on the leaves.
Thus, the correct answer is ‘Photosynthesis.’

Q3. Petiole part of the leaf is also known as?

Q4. Explain the internal structure of the leaf?

Answer: Leaf part contains cuticle present in the upper layer which protects plants from drying out by reducing of water loss, upper epidermis consists of a single layer of cells covered by cuticle which contains pores that allow gas and water molecules to pass, Palisade mesophyll present just beneath the epidermis, Spongy mesophyll is the second type of mesophyll which composed of closely packed irregular shape cells surrounded by airspace, lower epidermis present below the spongy mesophyll, which contains vascular bundles and stomata. the pore-like openings in the underside of the leaf are called stomata. Each stoma contains two guard cells which control the opening and closing of the stomata.