Do you know how the age of a tree is calculated? Well, we simply count the annual rings that form in its trunk due to the wood growth. This lateral expansion or growth of a tree is called Secondary Growth. Lets us learn about it here.

Growth in plants occurs in two ways: primary and secondary.

We need to understand that secondary growth occurs in both stems as well as roots. 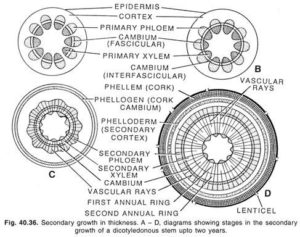 Cork Cambium: The cork cambium makes a tough, insulating layer of cells called as cork.  These cells have wax in them, which helps them protect the stem from water loss. Cork is also a part of the bark.

In cases of monocots, who lack cambium, secondary growth is not seen. The stems do not get as wide as in the dicots.

Secondary growth in roots leads to increase in the thickness of the root. This happens by the addition of vascular tissue.

Initiation of secondary growth takes place in the zone of maturation soon after the cells stop elongating there. The vascular cambium differentiates between the primary xylem and phloem in this zone. The pericycle is a cylinder of parenchyma or sclerenchyma or cells that lies just inside the endodermis and is the outer most part of the stele of plants.The pericycle cells divide simultaneously with the procambium. As a result, a cylinder of cambium is formed that encircles the primary xylem. Similar to the stem, the xylem is formed on the inside and the phloem towards the outside of the cambium.

Some roots form an outer protective layer called the periderm which originates from the pericycle and replaces the epidermis. The pericycle resumes its meristematic character and begins to divide periclinally again. At this point, it is called the phellogen or the cork cambium. This cork cambium forms cork cells towards the outside of the plant. They are suberized which makes the cells impermeable to water.

Q: Which part of the vascular cambium forms the bark in trees?