Tulips and daisies are both beautiful flowering plants. However, they do not fall into the same category of plants. Flowering plants are actually classified into two categories based on their embryo, called Monocotyledonous (monocot) plants and Dicotyledonous plants. Let us find out more about these plants. 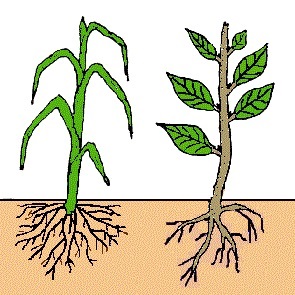 Dicots are plants that have seeds with two cotyledons and so are termed as dicotyledonous plants. Examples: Sunflower, Mango

Monocots are plants that have seeds with one cotyledon and so they are called as monocotyledonous (monocot) plants. Example: Sugarcane, Maize 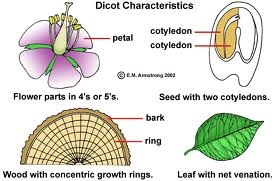 Understanding the anatomy of these plants is useful from the horticultural and agricultural aspects. Choosing the right product for the right kind of plant is important. A herbicide or pesticide designed for a monocot might not help kill pests around a dicot. Due to the tap root system that is found in dicots, they can penetrate deeper into the soil compared to monocots who have a fibrous root system which cannot penetrate that deep.

Learn more about the concept of Tissue System here in detail.

Q: Which of the following are features of dicot plants

Dicot plants have a taproot system, and seeds contain two cotyledons. The fibrous root system is found in monocots. So, the correct answer is (d) both a and c