Erosion and Weathering are the two processes responsible for the breakdown of rocks into fine particles. In the process of erosion, the rock particles are carried away by the water or wind whereas in the weathering process the rocks get degraded without any displacement.  Learn the difference between erosion and weathering.

Difference Between Erosion And Weathering 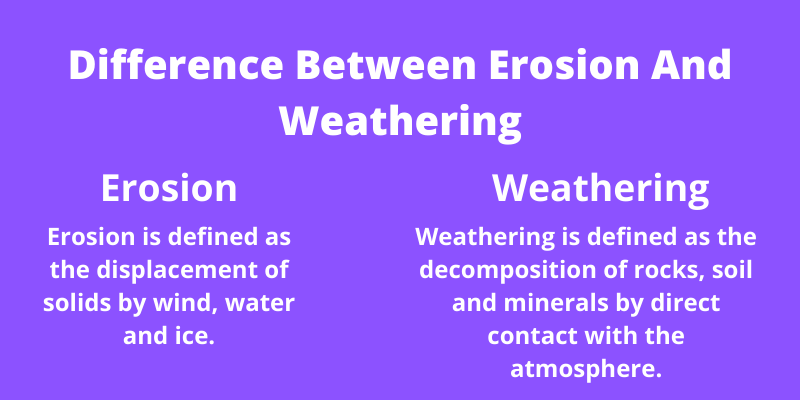 Erosion is the geological process in which the rock particles are broken down into fine particles. These particles are worn away and transported by natural forces such as wind or water. Most of the time erosion process is performed by liquid water, wind, or ice.

Various types of erosion are normally categorized by the force that carries rocks, stone, or soil away from its location.

Water is the most widely acknowledged force that causes erosion. Waterways wear out and carry rock and soil along their banks. In this way, water is responsible for the transport of these rock particles and soil. The erosion that happens in the sea, where moving water and waves degrades and carry away particles of the shoreline rock.

Wind erosion can take place on little particles of dust and rock, ash. In many cases, it can move huge amounts of little particles from their primary locations and make amazing formations like sand rises.

Ice erosion is uncommon in many pieces of the world. Still, ice can move a lot of bigger rocks compared to other erosion forces. Ice may carry enormous and massive rocks to miles from unique locations.

Weathering is the process that includes the mutation performed by sun, rain, and wind. In this most solid of the rocks undergo the break down into smaller bits before they are carried away. The action performed by the elements of climate and weather, animals, and plants on the land surfaces to bring this mutation biologically, chemically, and physically is known as weathering.

Weathering is the breakdown and decompose of the rocks. This process can be very slow and may take hundreds of years. The rapid process of weathering include damaging the footpaths or roads after the cold, However, weathering can also be rapid, such as the damage to pavements or roads after a cold, frigid winter.

Physical weathering is the process in which a rock’s physical structure is separated. For example, in the cool environment water that gets collected and freezes into the holes of rock will make those holes grow and break and split the rock. A similar process can be carried out by salt development or developing tree roots. Rubbing of the rocks and smoothing of the surface due to wind and water is another form of physical weathering.

Chemical weathering is responsible for the changes in the chemical structure of the rock. This results in making the rock milder or breakable. For example, iron in a rock may counter with oxygen to form effectively decomposable rust, or acids in water may take out the calcium from the limestone and marble. Chemical weathering regularly goes before physical weathering, making rocks progressively vulnerable against forces like breeze and rainstorms.

Rocks are also shattered by mechanical force. This procedure of fragmentation is known as mechanical weathering. Due to the frequent temperature variations, rocks begin to contract and expand. These actions led to the breakdown of rocks. This process is also caused by the roots of plants. These roots grow through the cracks in the rocks and crack the rocks apart. Chemical and mechanical weathering work simultaneously to break down rocks.