Locomotion and movement are two terminologies used in the study of motion. These terms are the most vital features of all living beings. All living organisms except plants move from one place to another for many important reasons like in search of food, shelter, to escape predators. Both Locomotion and movement come from the same basic expression which is related to the motion but is different from each other. Let us unfold more key points, that exhibit the difference between locomotion and movement.

Difference Between Locomotion And Movement 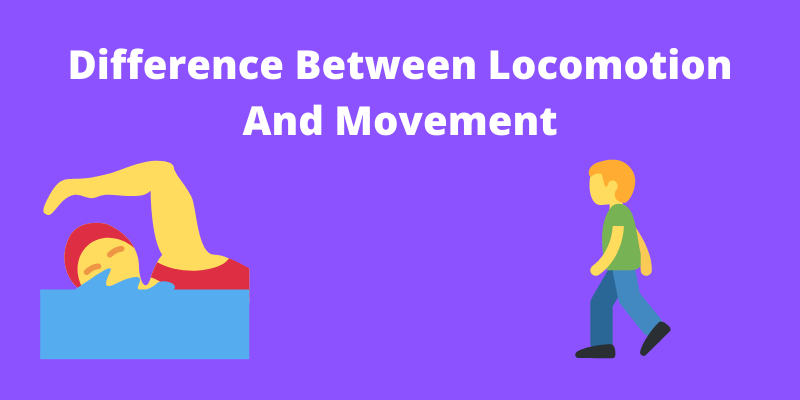 Let us understand the difference between locomotion and movement

Locomotion is defined as the movement of an organism from one place to another. This process is carried out with the help of the action of appendages such as limbs, wings, and flagella.

Locomotion takes place with the help of a wave-like series of muscle contractions in some animals, like fish, whales, and shark. Locomotion helps an organism in many important vital functions like searching food, get rid of a harsh weather condition, escape from predators, etc.

The locomotory movement is the synchronized movement of various bones, tissues, and joints such as muscles, bone, ligaments, cartilage, and tendons, etc. Locomotion consists of examples like walking, running, swimming, etc. While movement refers to any type of motion that need not be localized.

Locomotion in animals includes different types of movements as follows;

Movement is defined as changing the position from rest to motion or from motion to the rest. Movement can be either voluntary or involuntary. Movement helps an organism to perform many vital functions,like pumping of blood to the different parts of the body.

The human body movements get smooth as the age increases. The movement starts from crawling and with the growth in the age a person starts walking leading to the movement of the whole organism.

Movement implicates different types of the mechanism as follows;

Locomotion and Movement in Plants

Usually, plants cannot move from place to place. Thus, they do not experience any locomotion. However, the plants undergo different types of movements. It can also demonstrate movement in response to stimuli. Various types of movements can take place inside the plants which include phototropism, hydrotropism, thigmotropism, geotropism, etc.

Plants are not capable to move from one place to another but undergo different types of movements.

Insects are one of the very first groups of organisms to take flight, which makes them fall under the group of Aerial. The very first vertebrates to take flight was the Pterosaurs. The ocean was considered to be an interesting place as organisms like Sharks, fish, whales, and other aquatic species. These species exhibited even more advanced forms of movement. They used their tails and flippers to move through the ocean while one group of animals which includes squids and jellyfish use jet push to move through the water.

Both movement and locomotion are important for an organism to live. Locomotion helps us to move from place to other and for other purposes like for defense, searching for food and shelter. Movement, on the other hand, allows an organism to perform vital functions, which include breathing, pumping of blood to the other parts of the body, digestion, and others.