Neurosis is a light mental disorder. It does not occur due to any organic diseases. The main reasons for neurosis are depression, stress, depression, or anxiety. Psychosis is a personality disorder that occurs due to mental and emotional disturbance. The cases of psychosis are more critical than neurosis.  Neurosis and Psychosis are different types of mental disorders, so let us know more key difference between Neurosis and Psychosis.

Difference Between Neurosis And Psychosis 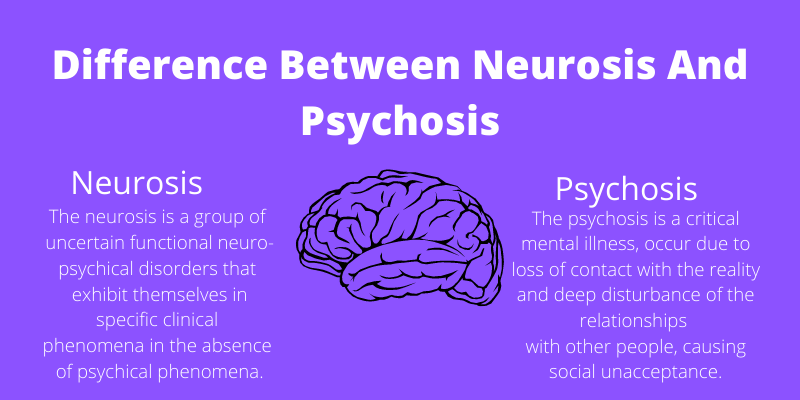 Let us know the key differences between Neurosis and Psychosis

The neurosis also occurs due to an internal conflict caused by an insoluble clash in the attitude of a person to reality. Such contradictions are found in the wrong upbringing, social space, and sphere of human relationships and conflicts.

The neurotics are specified by emotional imperfection or lack of maturity, reacting carelessly in specific situations. It can be managed and are rarely suicidal. Hospitalization is not required.

Neuroses include neuroses of phobic disorders, neurasthenia, fearful neurosis, hysteria. It is difficult to differentiate in the conditions because the pure form of neurosis rarely occurs. The treatment mainly includes psychological therapy like moral and general social support, general reinforcing procedures, psychotherapy, and medicines.

Psychosis is a critical mental illness, due to loss of contact with reality and a deep disturbance of the relationships with other people, which results in social unacceptance and degradation in personality. The relationship changes between patient and surroundings due to the disease process.

The psychosis is a brain issue. It is caused by genetic, biochemical, and environmental factors like physical trauma to the brain, intoxications, psychotrauma. Psychosis is related to certain pathomorphological changes in the body. This brings a major difference in the anatomical structure and functionalities of the neuro-cerebral substance.

Psychosis affects memory and imagination, feelings, perception and thinking, affections and relationships, consciousness, and personality. The person with psychosis is unaware of the disorder and is isolated from the outside world.

The psycho patient cannot manage themselves. They often practice to commit suicide and most of the time it requires hospitalization or care at home.