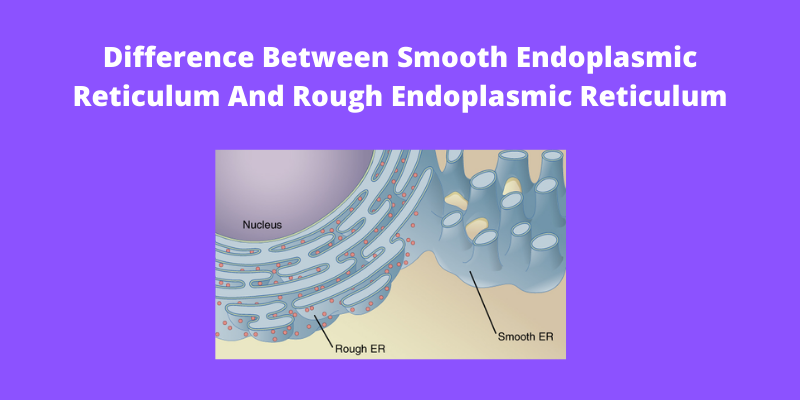 Smooth Endoplasmic Reticulum or SER appears to be like a smooth surface when viewed from the electron microscope as they do not contain ribosomes. They are also known as Agranular Endoplasmic Reticulum. The SER plays a vital role in the production, storage, and secretion of the steroid hormones and lipids. It also helps in the manufacturing process of new membranes and the metabolism of carbohydrates.

In the cells of mammal, SER plays a vital role to detoxify the reactions of drugs and other metabolic wastes. In liver cells, it provides the enzyme glucose-6-phosphate, which conscientiously takes part in the metabolism. SER is organized from the Rough ER when there is a mislaying of the ribosomes. It helps in the transportation of the protein but does not take part in protein synthesis.

The main function of the RER is to take part in the protein synthesis and helps in the transportation of the protein to other parts. It plays an important role to manufacture, sort (pack), and transport the secretory proteins like antibodies, insulin, blood clotting proteins, enzymes, collagen, mucin, etc in cells like fibroblast, goblet cells, hepatic cells, pancreatic cells, and B lymphocytes.

The appearance of Smooth ER is like it contains many circular marks. These marks are the interlocking tubular sheets, whereas the Rough ER appears like the organization of the double membranes which are spotted with the ribosomes all over. RER consists of the parallel sheets of the membrane.

Smooth ER is located near the cell membrane while Rough ER is present near the cytoplasm of the eukaryotic cells.

Smooth ER is derived from rough endoplasmic reticulum by sacrificing the ribosomes, whereas Rough ER originates from the nuclear membrane.

The main difference between the SER and RER is the presence of ribosomes, as SER does not consist of ribosomes but RER consists of ribosomes.

SER mainly manufactures and transports the lipids and protein and it helps in detoxification, whereas RER helps in the production, secretion, and transportation of the proteins and few hormones.

This article concludes that we studied the important part and functions of the plant and animal cells, along with how they vary from each other. So, the Endoplasmic Reticulum whether smooth or rough has significant roles in the production and processing of various molecules.