The field of genetics includes Gene and DNA. These two terms are used in the first place in the genetics field. In general, a gene is a short section of DNA while DNA- Deoxyribonucleic acid is a molecule. The DNA plays an important role to carry the genetic instructions or the hereditary materials. Learn the difference between Gene and DNA.

Difference Between Gene and DNA 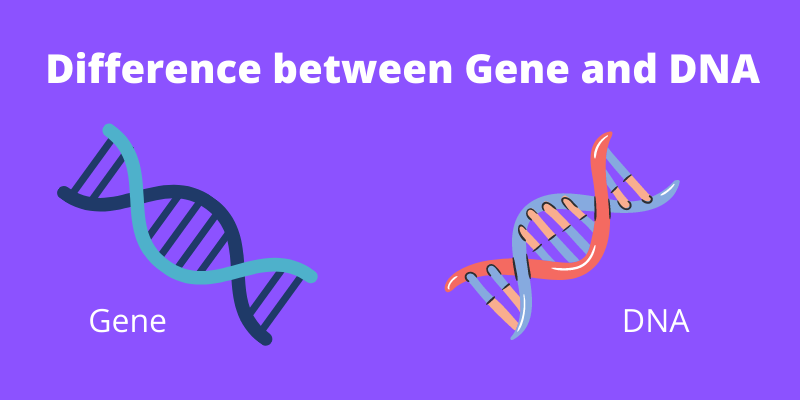 Let us unfold more key points, that exhibit differences between Genes and DNA

A gene is a chain of nucleotides in DNA or RNA. This helps in encoding the fusion of a gene product, either RNA or protein.

During the process of gene expression, the DNA is first copied into RNA. The RNA directly gets into functions or performs as an intermediate template for a protein that performs a function.

The transmission of genes is done based on the legacy of the phenotypic trait of an organism. These genes play an important role in the development of different DNA sequences. This sequence is known as genotype.

Depending on the environmental and developmental factors, the genotypes determine which phenotypes will take place. Most of the biological characteristic is under the control of polygenes as well as gene-environment interactions. The polygenes are a bunch of many different genes. Some genetic characteristics like eye color or the number of limbs are instantly visible, while few traits like blood type, the risk for specific diseases, or the thousands of basic biochemical processes that constitute life, are not instantly visible.

DNA is a molecule that consists of a double helix that carries genetic instructions for the development, functions, growth, and reproductions of all known organisms and many viruses. It is a composition of the two polynucleotides. These polynucleotide coils around each other to form a double helix.

DNA and RNA (ribonucleic acid) are nucleic acids. Apace with the proteins, complex carbohydrates, and lipids, nucleic acids are one of the four major types of macromolecules that are required for all known forms of life.

The nucleotides are linked to one another in a chain by covalent bonds. This bond is known as the phospho-diester linkage. The link is between the sugar of one nucleotide and the phosphate of another nucleotide. This results in an alternating sugar-phosphate backbone.

The nitrogenous bases of the two separate polynucleotide strands are bound together, with hydrogen bonds to make double-stranded DNA. This bound is done according to the base-pairing rules (A with T and C with G). The complementary nitrogenous bases are further separated into two groups, pyrimidines, and purines. In DNA, the pyrimidines include thymine and cytosine; while the purines include adenine and guanine.

A large part of DNA does not serve as patterns for protein sequences. This part is known as non-coding DNA. The two strands of DNA are known as antiparallel. Due to this reason, these strands run in opposite directions to each other. The attachment of sugar is done with one of four types of nucleobases. The genetic information is encoded by the sequence of these four nucleobases.