Bond parameters refer to the characterization of covalent bond on the basis of various parameters like bond length, bond angle, bond enthalpy. In this chapter, we will learn more about the concept of bond parameters.

Different atoms combine all together in order to become stable. By forming bonds, this combination takes place. There are different types of bond, namely, ionic or electrovalent bond, covalent bond, and coordinate bond. This, in turn, shows that every bond has some feature associated with it.

Here are some of the different features or characteristics of bonds which can be termed as bond parameters. A particular covalent bond is characterized by certain parameters:

The bond length refers to the distance between the centers of the nuclei of two bonded atoms in an equilibrium position. The stronger the force of attraction in between the bonding atoms, the smaller is the length of the bond. However, the bigger the atom size, the longer the bond length.

It is measured by spectroscopic, X-ray diffraction and electron diffraction technique. Each atom of the bonded pair contributes to the bond length. In case of a covalent bond, the contribution by each atom is the covalent radius of that atom. 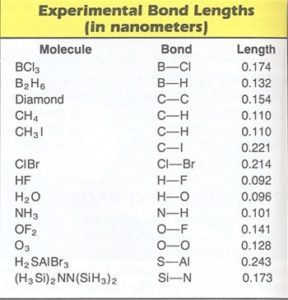 The certain factors upon which the bond length is dependent are –

The stronger the force of attraction between the bonding atom, the smaller the bond length.  However, the bigger the size of an atom, the longer will be the bond length. Also, it is to be noted that in the case of a covalent bond, the contribution by each atom is referred to as the covalent radius of that atom.

Bond angle refers to the angle between the two bonds i.e. the angle between two orbitals that contains a pair of bonding electron around the central atom in a complex molecule or an ion. This angle is usually measured in degrees, further calculated using the spectroscopic method.

The amount of energy which is needed in order to break one mole of the bond of a particular type between two atoms in a gaseous state is referred to as the Bond Enthalpies. Bond enthalpy is directly proportional to the strength of the bond between the molecules. As per the Lewis description of covalent bonds, the bond order is the number of bonds that forms in between the two atoms in a molecule. The Isoelectronic molecules or ions have the same bond order.

Important Points Regarding the Bond Order

Question: Determine the bond order for nitrate ( NO3− ) ion.