Ammonia Formula- Ammonia, azane or nitrogen trihydride, is the simplest inorganic base that is also an important source of nitrogen for many applications.

Structure and Formula of Ammonia

Its chemical formula is NH3and the molar mass is 17.03 g/mol. It is a compound of hydrogen and nitrogen. The molecule of ammonia has a trigonal pyramidal shape that the VSEPR theory (Valance Shell Electron Pair Repulsion theory) with an experimentally determined bond angle of 106.7o.

Also, the central nitrogen atom has five outer electrons with an additional electron from each hydrogen atom. Which gives a total of eight electron or four electron pairs that are arranged tetrahedrally. Besides, three of these electrons pairs are used as bond pairs and it leaves one pair of electron lonely. 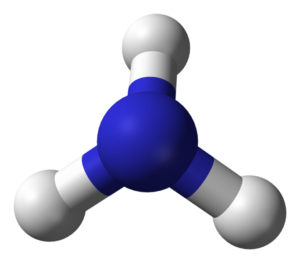 Furthermore, the ammonia molecule has a trigonal pyramidal shape that has nitrogen, which connects to three hydrogen atoms. The lone electron pair of nitrogen atom makes the base for ammonia. NH2 is a polar molecule that readily forms hydrogen bonds which makes it highly miscible in water.

Naturally, it exists in the body, the kidneys secrete them to neutralize excess acid. Moreover, we can find its small amount in rainwater, volcanic areas, and even in the atmosphere.

Commercially they produce ammonia by the Haber-Bosch process, in which elemental hydrogen and elemental nitrogen react in the presence of a metal catalyst to give ammonia gas. This reaction took place at a high temperature (400-550oC) and high pressure.

It is a colorless/ transparent gas that has a penetrating odor. It freezing point it -77.7oC and the boiling point is -33.35oC.  Besides, we can liquefy the NH2 gas, but due to extremely low boiling point, we store liquid ammonia at low temperature and at high pressure.

It is a weak base that combines with numerous acids to form ammonium salts that are important in chemical industries. Moreover, it readily dissolves in water in an exothermic reaction, to form an aqueous ammonia solution that we know as ammonium hydroxide (NH4OH).

It is also an important non-aqueous solvent that can dissolve many alkalies and alkaline-earth metals to produce blue-colored conductive solutions.

It is the precursor to various important nitrogen compounds that includes urea, phenol, amino acids, hydrogen cyanide, acrylonitrile, nitric acid, soda ash, and many more. Also, industries use it in the production of polymers, fertilizers, synthetic fibers (rayon and nylon, etc.), explosives (nitroglycerin, TNT), refrigerants, and cleaning agents. Moreover, it is a common nitrogenous waste, particularly among aquatic organisms.

Additionally, it contributes significantly to the nutritional needs of land organisms by serving as a precursor to food and fertilizers. Either directly or indirectly it serves as a building block for the synthesis of many pharmaceutical products. Many commercial cleaning products contain ammonia. Mainly it collects by the downward displacement of both air and water.

In nature, it is widely available and we use it in the household for many purposes. Scientists consider it a toxic gas by inhalation. NH3fumes have a sharp and pungent odor that can irritate the nose, eyes, skin and mucous membrane, and can damage the respiratory tract. However, high concentration exposure to ammonia gas can cause permanent lung damage and death.

Question: How they prepare ammonia before world war I?

Solution: Earlier from World War I, most ammonia was gained by the dry distillation of nitrogenous vegetables and animal waste products that include camel dung. These were distilled by the reduction of nitrous aid and nitrites with hydrogen. Most noteworthy, they produce it by distillation of coal, and by the decomposition of ammonium salts by alkaline hydroxides such as quicklime: