Amino Acid Formula- It is an organic compound that has key elements carbon, hydrogen, nitrogen, and oxygen. Other elements also exist in its side chains of certain amino acids. Naturally, we know around 500 amino acids (only 20 appear in the genetic code) and we can classify them in many ways. Besides, in biochemistry, amino acids have both the amine and the carboxyl acid group attached to the first (alpha-) carbon atom.

The chemical formula of amino acid is R-CH(NH2)-COOH and its molecular weight is 110Da (Dalton). It consists of a basic amino group (-NH2) and an acidic carboxyl group (-COOH) along with an organic R group (side chain) which is unique in each amino acid. In addition, the term amino acid is short for α-amino (alpha-amino) carboxylic acid.

In each molecule of amino acid, there is a central carbon (C) atom (α-carbon) to both an amino and a carboxyl group are close. Generally, a hydrogen atom and the R group satisfy the remaining two bonds of α-carbon. Besides, amino acids differ from each other in the particular chemical structure of the R group. 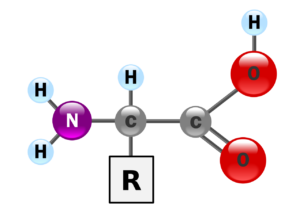 It is the structural unit that makes up the proteins. They connect together to form short polymer chains referred to as peptides or even longer chains that we call polypeptides or proteins. Furthermore, these polymers are unbranched and linear, in which each amino acid within the chain attaches to neighboring amino acids.

We can find non-proteinogenic amino acids in proteins that form by post-translational modification, which modification after translation during protein synthesis. Moreover, these modifications are frequently crucial for the function or regulation of a protein.

For the survival of the cell, the synthesis or collection of amino acids is important. Also, they serve as the building block. In addition, they are the starting point for the synthesis of many important cellular molecules that includes vitamins and nucleotides. Furthermore, in most cases, we can synthesize amino acids by one step reactions from central metabolites. Also, their structure are simple and their synthesis is also straightforward.

They are optical isomerism also they absorb in the ultraviolet region. Also, all amino acid contains two ionizable groups known as the carboxyl group and an amino group.

In industries, the amino acid has a variety of applications. Their main use is as an additive to animal feed. It is important as many of these bulk components feed such as soybeans either have low levels or lack some of the essential amino acid: lysine, methionine, threonine, and tryptophan are very significant in the production of these feeds.

In the food industry, glutamic acid is used as a flavor enhancer and aspartame as a low-calorie artificial sweetener. Its chelating ability is used in fertilizers for agriculture to facilitate the delivery of minerals to plants in order to correct mineral deficiencies. In pharmaceutical industries, they use it to treat depression.

It causes severe corrosive to the respiratory system and skin. Also, it is harmful if swallowed. And may cause burn to mouth, throat, and stomach.