Who is the father of coordination chemistry? Yes! The man in question is none other than Werner. He is famous for his Werner’s theory of coordination compounds. Are you aware of what this theory is? In this chapter, we will study all about the theory and look at its postulates and examples.

What is Werner’s Theory?

The important postulates of Werner’s theory are:

Examples Based on Postulates of Werner’s Theory

1) CoCl3.6NH3 Complex: In this compound, the coordination number of cobalt is 6 and NH3 molecules satisfy all the 6 secondary valencies. Chloride ions satisfy the 3 primary valencies. These are non-directional in character. These chloride ions instantaneously precipitate on the addition of silver nitrate. The total number of ions, in this case, is 4, three chloride ions and one complex ion. 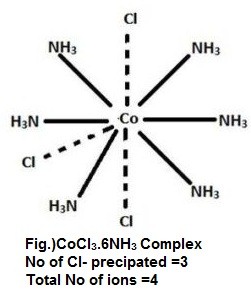 2) CoCl3.5NH3 complex: In this compound, cobalt has the coordination number of 6. However, we see that the number of NH3molecule decreases to 5. The chloride ion occupies the remaining one position. This chloride ion exhibits the dual behaviour as it has primary as well as secondary valency. 3) CoCl3.4NH3 complex: In this compound, two chloride ions exhibit the dual behaviour of satisfying both Primary and Secondary Valencies. This compound gives a precipitate with silver nitrate corresponding to only one Cl– ion and the total number of ions, in this case, is 2. Hence, we can formulate it as [CoCl2(NH3)4]Cl.

Werner turned his attention towards the geometrical arrangements of the coordinated groups around the central cation. He was successful in explaining the cause behind optical and geometrical isomerism of these compounds. Some examples are as follows:

1) [CoCl2(NH3)4]Cl complex: According to Werner, there are three structures possible for this complex. These are planar, trigonal prism, octahedral. The number of possible isomers is 3 for planar, 3 for trigonal prism and 2 for octahedral structure.

He also read the geometry of the complexes where the coordination number of the central metal atom is 4. He gave two possible structures for such compounds: Square Planar and Tetrahedral. Let us look at an example of the same.

2) [PtCl2(NH3)2] complex: In this complex, the coordination number of the metal is 4. According to Werner, this complex exists in two isomeric forms, cis and trans. This shows that all the four ligands lie in the same plane. Therefore, the structure should be a square planar or tetrahedral.

Learn more about Isomerism and its types.

Q: What are the limitations of Werner’s Theory?

Ans: Like all the major theories, Werner’s Theory was not free from limitations. The common limitations of the theory are:

Learn the Nomenclature of Coordination Compound to find the answer.