We can divide interhalogen compounds into four types, depending on the number of atoms in the particle. They are as follows:

With an increase in the radius proportion, we see that the number of atoms per molecule also increases. Therefore, we can make out that Iodine heptafluoride possesses the greatest number of particles per atom. This is because it has a magnificent radius proportion.

Common Shapes of these Compounds

Applying the VSEPR theory, we can see that it forms a trigonal bipyramid. The lone pairs take up the tropical positions. On the other hand, bond pairs take up the other three positions. The axial bond pairs bend towards the tropical position. This happens in order to minimize the repulsions that happen due to lone pair-lone pair bonds. Thus, it has the shape of a bowed T. 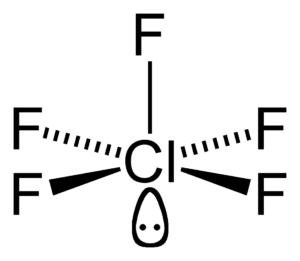 Q1: Can fluorine ever be a central atom?

Ans: Fluorine cannot be a central particle in the inter-halogen compounds. This is because it is an element from the 2nd period in the periodic table. Since it has 7 valence electrons, it can form only one bond.

Q2: Why can’t hydrogen be the central atom?

Ans: Hydrogen can’t be the central atom. We can attribute this to the fact that an atom will always attempt and get to the condition of most minimal energy. In case of Hydrogen, this means it can form only a single bond. It also has a very small size and does not fit into the other molecules present around it.

Share with friends
Previous
Oxoacids of Halogens
Next
Hydrogen Chloride