Now, you have quite some idea about the periodic table. Have you heard about the ‘halogen‘ lights? Yes, the ones that you use in your garden, maybe? But, do you know that the Group 17 elements in the periodic table are called “halogens”. Why? Well, we will find out soon! In this chapter, we will cover all about halogens, their properties, and uses.

The group 17 elements include fluorine(F), chlorine(Cl), bromine(Br), iodine(I) and astatine(At) from the top to the bottom. They are called “halogens” because they give salts when they react with metals. So, now you know what halogens are! Let’s now look at the electronic configuration of these elements. 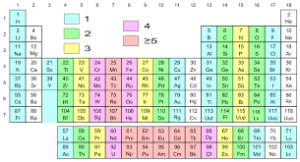 Let us now look at the various atomic properties of the group 17 elements. We will speak about the ionic and atomic radii, ionization enthalpy and more.

The nuclear and atomic radii of these elements keep on increasing as we move down the group. This happens because of the addition of an extra energy level. They have the minimal atomic radii compared to the other elements in the related periods. This can be attributed to the fact that their atomic charge is quite powerful.

These elements have higher ionization enthalpy. This value keeps on diminishing as we move down the group. This happens because of the increase in the size of the nucleus. However, it is interesting to note that fluorine has the highest ionization enthalpy than any other halogen, thanks to its minute size!

The electron gain enthalpy of these elements becomes less negative upon moving down the group. Fluorine has lesser enthalpy than chlorine. We can attribute it to the small size and the smaller 2p sub-shell of the atom of fluorine.

Let us now look at the various physical properties of these halogens.

We will now have a look at some of the chemical properties of these elements.

All halogens react with hydrogen and produce acidic hydrogen halides. The acidity of these hydrogen halides reduces from HF to HI. Fluorine reacts violently and chlorine requires the sunlight. On the other hand, bromine reacts upon heating and iodine needs a catalyst.

Halogens react with oxygen to form oxides. However, it has been found that the oxides are not steady. Beside oxides, halogens also form a number of halogen oxoacids and oxoanions.

As halogens are very reactive, they react with most of the metals instantly and form the resulting metal halides. For example, sodium reacts with chlorine gas and forms sodium chloride. This process is an exothermic one and gives out a bright yellow light and a lot of heat energy.

Metal halides are ionic in nature. This is because of the high electronegative nature of the halogens and high electropositivity of the metals. This ionic character of the halides reduces from fluorine to iodine.

Q: Mention some uses of halogens.

Ans: The uses of halogens are: