Solids have varying degrees of conductivity i.e. all solids do not have uniform electrical properties. Actually, solids can be divided into three broad categories based on their electrical conductivity. These three groups are as follows,

Broadly speaking, conductors are solids that have good electrical conductivity. They allow heat energy and electric currents to transmit through them with ease and speed. Conductors allow this transfer of energy to happen via free flow of electrons from atom to atom. They have the ability to carry this energy throughout themselves even when the current is only applied to one part of their body.

All metals are known to be the best conductors. Their conductivity depends on the number of valence electrons of their atoms. These electrons are not closely bound together and can move freely. Metals have such electrons in their atoms, and so they conduct heat and electricity so well. Metals allow the electric field to transmit through them in conductivities order of 106 – 108 ohm-1. 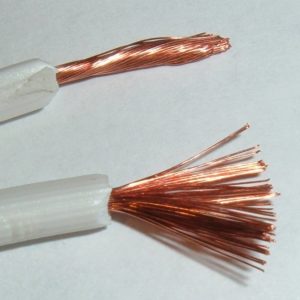 Stark opposite to conductors, insulators are materials that absolutely do not conduct any electric energy or currents. They do not let any (or very little) electric charge flow through them. They have a significant band gap which prevents the flow of electricity. Some examples are glass, wood, plastics, rubber etc.

Since insulators are very bad conductors they have another use. We use them to insulate conductors and semiconductors. For example, you must have seen copper wires with a covering of plastic or some form of polymers. They protect the wires and cables without allowing the electric current to go through them. This is insulation of the wire. One reason why semiconductors are an important material is that we have control over their conductivity. This is why they find many applications, especially in electronics.

Q: Conductivity of semiconductor increases with increase in temperature. True or False?

Ans; The given statement is True.