If you must learn about the Union Parliament and its functions, the simplest way is to read what Mr. Walter Bagehot says. “A Parliament is nothing less than a big meeting of more or less idle people.” However, having said that, we must learn about the Union Parliament just the same. Who knows, you might just be a parliamentarian tomorrow, and it might help to know a few things about your job profile. So, let’s get started and help you understand the subject in detail. 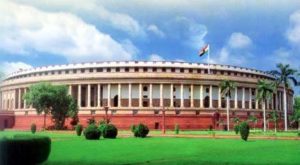 Parliament is a body of legislatively elected members who form a part of the government. A country is run by its Parliament. Traditionally there are three key functions accorded to the Union Parliament:

To govern a country efficiently we need policies and laws.  The function of the legislative is to form policies and laws that will govern the nation. The Union Parliament is chiefly concerned with this function.

To ensure that these functions are duly followed, Constitution of India provides for two houses, Lok Sabha or the Lower House and Rajya Sabha or the Upper House. Together these houses ensure that the legislative functions of the Government are executed properly by passing relevant laws and making citizen friendly policies.

Once the laws have been duly made and sanctioned, the duty of implementation falls on the executive body. The state governments and other relevant bodies are responsible for this function. Legislative and Executive functions are interdependent functions of the Parliament.

Execution of laws and policies are ensured by the office of the Executive. These offices are that of Prime Minister and his Cabinet at the central level. At an administrative level, the civil servants have the responsibility of ensuring that all the policies introduced by the government are duly implemented and its benefits reach the people.

Once the rules have been made and compensations for breaking them established, it becomes imperative that there is a body which monitors proper adherence to these rules. Judiciary ensures that those who do not follow the rules are duly punished.

It also acts as a conflict resolver for the government. In order to ensure justice and fairness, the judiciary has been made independent of the other two functions. Thus, a court has the authority to try members of Parliament, members of the executive and citizens of the country, if it finds them guilty of any misdeed.

Thus, we may say that while the Legislative makes the law, the executive implements the law, the Judiciary upholds the law. All three bodies of the Union Parliament have a key role to play in the smooth functioning of the Government.

Q1. State the minimum number of times the Lok Sabha must meet in a year.

Ans: According to the constitution, the Lok Sabha must meet at least twice a year with no more than six months break between two sessions.

Ans: The term Quorum refers to the maximum number of members that are required to be present for any of the Parliamentary procedures. The Quorum of the Lok Sabha is one-tenth of the total number of members of Lok Sabha. With reference to the Union Parliament, please answer the following questions:

Q3: Name the three organs that have the responsibility of running the government of India democratically?

Ans: The three organs that assist in running the government in a democratic manner are as follows: