The executive is one of the three key functions of the Parliament. It’s role is to implement the laws that have been framed by the legislature and the policies of a government. With the rise of welfare states, the need for organised state functions has also risen and Executive is one of the most crucial function. It ensures effective governance in the states.

There are two forms in which one may categorise Executive. They are both broad and narrow.

Firstly, in a broad form, it includes all the government functionaries, political personnel and civil servants who take up the implementation of policies and laws and also the administration of the state.

In narrow form, it includes only executive heads that are to say, ministers. They are also known as a political executive. These people are heads of government and other key departments of government. They are also responsible for formulating policies and supervising the implementation of such policies.

This does not include civil services or its administrative functions. For the political scientists ideally, only the narrow meaning of executive was accepted. But with the modern changing dynamics of state governance, Civil Services are also included as part of executive along with the Political executive. 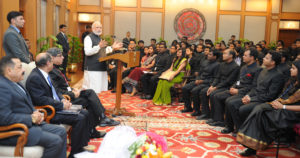 Political leaders of a country who are voted to power by way of direct or indirect elections are called ministers. They are heads of the state or of other key departments in the government, both state and central. Such leaders perform the executive function and have the responsibility of framing key state policies and decisions that help running state effectively. A Political Executive is elected for a fixed term of five years.

Political Executives are temporary executives, unlike Civil Servants who are elected for a permanent commission. They have to be re-elected after the end of their tenure by way of elections. Their role largely depends on whether or not their party comes to power again or not.

Although there are no set educational qualifications to become a minister, yet there are certain criteria that a candidate ought to fulfil. The role of a political executive is very crucial in the frame of things. They are ministers and ministers are expected to form policies and laws that will be used to govern the states.

A minister or a ministry is responsible for framing such laws and then presenting the same to the legislature. The legislature, after deep scrutiny, decided whether or not to pass the law presented by the political executive. In conclusion, once the laws have been approved by the legislature, it falls on the executive to implement and govern them efficiently.

Q. Who among the following is a part of the political executive?