What goes around comes around right? Have you ever wondered where the money your parents earn comes from? And after you have spent it, where will this money end up? As you may have figured it out, money in our economy flows in circles. We call this the circular flow of income. Let us learn more.

In the course of your academic year, you are in constant need of textbooks, notebooks, and stationery. And your family members usually fulfil these basic demands. But have you ever wondered how they are able to do this? You must have seen your parents go to work every day and receive salaries in return for their services. And this salary is what they use to pay for your education and your basic needs.

Now in addition to your education, they also account for numerous other expenses like household groceries, rent, and so on. And these expenses, although small, affect the economy in some way or the other. Let’s see how.

Now let’s take groceries as an example. When your parents purchase groceries, it creates a demand for the same. An increase in demand translates into an increase in production of goods and services. And to meet this demand, manufacturers and industries hire more people in exchange for their skills and services.

In this process of providing services, people earn more spendable income. If you observe closely, there is a continuous flow of money from households to industries and back to households. And that’s exactly what is referred to as circular flow of income.

Let’s now understand this concept in economic terms. The circular flow of income is a model that represents how money moves around in an economy. In a simple economy, we have only two components—households and industries. But it isn’t that simple.

In an open economy, there are a lot more factors that affect the circular flow of income. In addition to household consumption and business production, an open economy also takes into account the government spending and foreign trade.

Money is injected into the economy when the government invests money in infrastructure and welfare schemes. Similarly, industries and businesses also earn income when they export goods. However, when we import goods and services and pay taxes to the government, we reduce our spendable income.

Now government spending, exports, and investments together with household income (wages) constitute the influx of money into an economy. Similarly, business investments, taxes, and imports constitute the total outflow. The national income will increase when the total influx of money is more than the outflow of money. And the circular flow of income will be in balance when the total influx matches the total outflow. 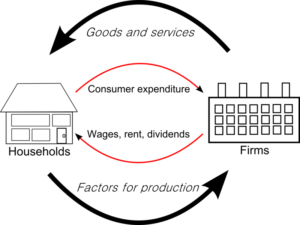 The income method of calculating national income focuses on the production perspective. Now production of goods and services involves the use of land, labour, capital, and so on. And if we consider these factors of production, income is generated via rent, wages and salaries, profits, and interest.

We can then calculate the national income by adding all these types of income. Another important source of income is mixed income. Mixed income refers to the income generated by self-employed professionals and sole proprietors.

According to the income method:

Hence, according to the expenditure method:

However, the expenditure method excludes expenditure on second-hand goods and purchase of shares and bonds.

Usually, this method involves dividing the economy into various industries such as agriculture, fishing, transport, communication, and so on. Then by calculating the value added ((NVAFC) at each stage, we can derive the national income. Now since this method concentrates on the net value added by each component, we would need to exclude or subtract the following elements from the output of each enterprise:

Hence, according to the value-added method:

Q: Which of the following sources is an exception while calculating national income using the income method.