In this article, you will be reading Television Summary. It is one of the best poems written by the most prolific writer, well-known author of children named Roald Dahl. The author inspires and advises the youths to read books instead of watching the television. He explains that watching the television excessively blocks one’s power of imagination. Also, it has adverse effects on the health and creative powers of a child. Furthermore, it makes one dumb and blind. He emphasized reading more and more books so that they can discover and learn many new things. He says reading a way to add joy and fulfilment in life and to explore an exciting world. 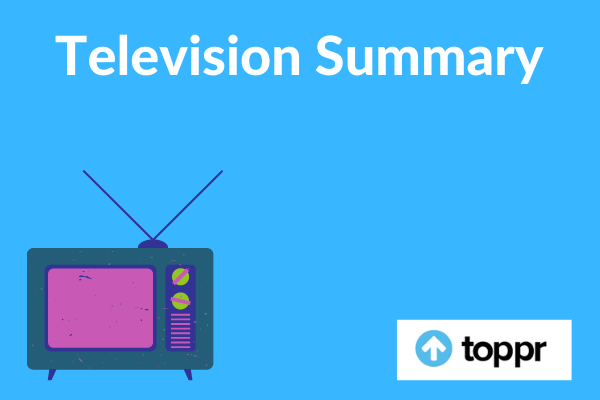 Then, he shares his experience where he has seen many children watching television with eyes wide open and full concentration. They do not care even on getting too tired of watching. They keep on watching television until their eyes pop out. Moreover, they become still for long hours. They even forget the real world. The one happening on the television becomes real for them.

Thus, they are almost captivated by this idiotic box. They are ‘drunk’, their minds are filled with those ‘shocking ghastly junk’ which are mostly artificial and unsuitable for the generation. Those TV shows kill their valuable time making them lazy too. They don’t find time for their physical play and exercise.  Moreover, they find no time for books and nature, and to interact with others.

The poet says that television keeps the naughty children quiet as they don’t climb out the window sill, fight, kick or punch, and let mother free to cook food and wash the dishes. However, he adds, it cannot be a defence and let them sit in front of a TV. He understands that it does more damage than good.

Furthermore, the poet asks the parents if they exactly understand what are they doing with their lovely child. He answers the question himself. He tells that television damage their senses. A child becomes unaware of the real world. He takes whatever it shows as real. It kills his imagination power and creativity. A child views different shows with contradictory ideas. This, they get messed up in their thoughts.

Moreover, he is unable to utilise his time in thinking over other things as he is already messed up with the thoughts of the fictional world. He could not make efforts for the development of his personality thus making him dull and blind. Also, children fail to understand a fairy tale as they are captured by virtual reality. Also, their brain becomes soft as cheese. They could not think on their own. Their thought process freezes and gets rusty.

Now, he answers the question that parents would ask him as to how to keep their children engaged in the absence of TV. He answers that they should be motivated to read and read and read. He adds that children in earlier times used to read a lot. The nursery shelves were full of books. Also, books were scattered everywhere. Moreover, the poet talks about popular books on the adventure of his time. These included books of dragons, gipsies, Queens and many others. Also, the youth in earlier times used to read stories written by Helen Beatrix Potter. Some of his stories like ‘How the Camel got its hump’ and its characters are also mentioned.

The poet, thus, requests the parents to throw away the television set and install a bookshelf in its place. However, the children would resist the change by giving dirty looks, yelling, screaming or biting, yet, they should be overlooked.

The poet says that the children will have no option left but to read books in the absence of television. Then, slowly they would start finding joy and would even thank their parents in the future to fill them with knowledge and wisdom.

The poem tells about the damages caused due to watching Television. Moreover, it focusses on the importance of reading books.