In this article, you will be reading Daffodils Summary. It is one of the best- known works of the most influential English Romantic poet, William Wordsworth. The poem was composed in the year 1802. The title of the poem informs about the loneliness of the poet which he faces after the death of his brother. However, the endless view of the golden daffodils in a field across the lake filled him with joy. This view was the greatest gift of nature to him. Whenever he remembers it, his depressed mind and heart find the joy of living again. 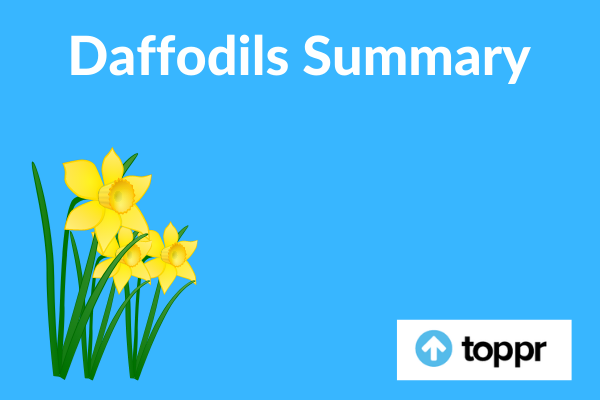 In this article, Daffodils Summary, we will understand the critical analysis of the poet in brief. The poem is not a result of the poet’s imagination. It is a product of his actual visualization. The poet expresses his feelings of solitude by saying ‘ I wandered as a lonely cloud’. The reason behind his feeling of loneliness was the death of a beloved one, his brother. Passing through a field beside the lake, he comes across a cluster of golden daffodils waving in the breeze. Moreover, they were more isolated patch or scattered. They were thousands and thousands in number dancing in the breeze.

Furthermore, the dancing, blinking flowers stretched endlessly along the shore. Also, the shining waves of the lake danced beside the flowers. The daffodils traced the water with their beauty. Moreover, the poet says, the golden daffodils twinkled and stretched in an endless line like the stars in the Milky galaxy way. It implies that the flowers seem heavenly as stars. This made the poet very happy as he has never seen so many daffodils at one sight. He enjoyed the company of flowers.

Furthermore, he keeps on starting that beautiful scene. He couldn’t take off his eyes from the loveliness of daffodils.  However, he was unaware of the blessing that the scene would give him. From that time, whenever he felt lonely or depressed, the scene of the beautiful daffodils strike his strikes. Thus, his heart gets filled with immense pleasure and dances with the daffodils.

The plot is very simple. It depicts the poet’s wandering and his spotting of a field of daffodils by a lake Also, the memory of the daffodils pleasures him and relieves him when he is alone, bored, or suffering from feelings of restlessness. Moreover, the characterization of the surprising happening of a memory—the daffodils “flash upon the inward eye”, which is “the bliss of solitude”—is psychologically acute, but the poem’s major brilliance lies in the reverse personification of its initial stanzas.

The article on Daffodils Summary talks about how nature and memory were very close to the heart of romantic poets like Wordsworth. Also, it has a message to praise the beauty of nature. One who is close to nature and enjoys in its company never feel depressed or lonely. Nature is the greatest gift or blessing to mankind. It has the power to heal our miseries and make us lively again.