Summary of The Cold Within

In this article, you will be reading The Cold Within Summary. It is a popular poem written in the year 1960s by the American poet James Patrick Kinney. It appeared in countless church bulletins, websites and teaching seminars. Also, it was published in magazines and newspapers. It was rejected for the first time as it was thought to be controversial. Later, it became very popular throughout the United States. The poem is simple yet powerful. It tells the outcomes of letting one’s prejudices control his or her decisions. The poem opens with six people trapped by coincidence in the biting cold weather. Each one of them had a wooden stick. A fire was keeping them warm. However, it was about to die anytime and no one was ready to give his log to use. Each one had their reasons for the same. 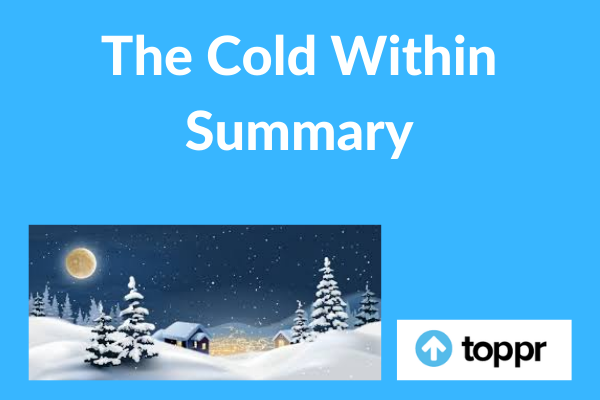 The Cold Within Summary in English

The article, The Cold Within Summary is a brief account of the poem ‘The Cold Within’. It begins with the lady who didn’t want to protect a black man in the group.  This shows the attitude based on racism. This attitude will backfire the person at last.

The other man saw a person of a different religion. Thus, he didn’t help him. This shows there was discrimination in his mind based on religion.

The third one was a poor man. He was dressed in rags. He was jealous of wealthy people and called them lazy. Thus, he pulled his coat to warm himself but hold back his log.

Furthermore, the wealthy person didn’t want to offer anything to the poor. He thought that the poor did not deserve anything. There was a black man too. He was filled with the feeling of revenge against the white person. Moreover, the last man was full of selfishness. He used to help only on finding something beneficial for him i.e. he should be able to gain something out of it.

Each one trapped in the cold was sinful. The logs in their hands represented their prejudices. None of them was willing to give up the same. They were unaware that these feelings would end up killing themselves. He or she was committing sins of racism, jealously, arrogance, revenge. It appears as if the sticks they held tightly in their hands were the signs of revenge and hatred. They lacked the quality of being a human. They all acted in an ungrateful manner. Thus, they all invited death for themselves due to their selfish behaviour. The feelings of revenge and hatred are termed as the coldness of their hearts.

However, the fire is used to symbolize common good. It carries a message that each one should give up their feelings of enviousness, selfishness and hostility towards another race or caste and help each other. This is the only way in which people can achieve salvation. When people fail to respect each other, have ill-feelings and discriminate each other, they become victims of their own downfall.

Conclusion of the Cold Within

This article, the Coldness Within, the poet tries to explain the effect of prejudices in one’s life. People have to pay the price when they let their prejudices control their actions. These prejudices make us insensitive towards other people and we tend to behave inhumanly. We regard other people as inferior or hostile and lose compassion. We end up losing everything.