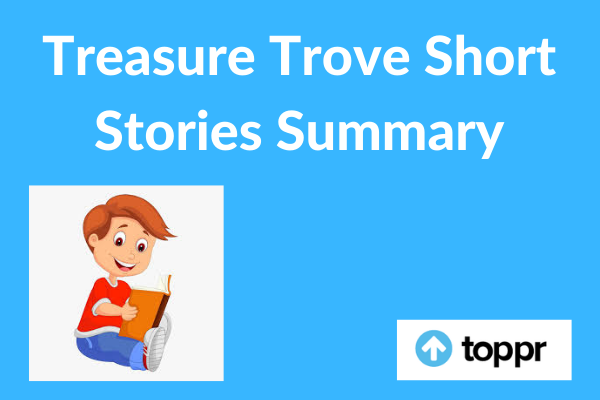 There is a list of short stories covered in Treasure Trove Short Stories. These include:

Old Man at the Bridge

A Horse and Two Goats

A Face in the Dark

An Angel in Disguise

All Summer in a Day

It contains arguments that are given by Chief Seattle in Washington in the favour of native American land rights. Also, it is said to arouse the feelings of ecological responsibility.

Old Man at the Bridge

It deals with the issues of resignation, depression and approaching demise of the old man who has surrendered himself to his fate.

A Horse and Two Goats

It reflects upon many social issues. Issues of cultural differences, poverty and wealth, knowledge and wisdom, caste system, prejudices and superstitions have been directed here.

It shows the kindness of a marshal towards his convict and a person that appearances could be deceptive.

A Face in the Dark

It could be interpreted as having the collective fascination with the darkness in his subconscious mind.

The story gives us a powerful message that love can win even a heart of stone and its bitterness.

It is a story of a little girl who is deprived of all joy. A story where hunger, poverty and helplessness forces a girl to sell matches at the age of going school.

It is all about the heroic deed of a girl, Sibia and her innocent wish that gets fulfilled with the grace of God.

In this story, there is an autographical account of a writer named Jesse Owens depicting true friendship and true sportsmanship. He learns to be broad-minded from his friend.

All Summer in a Day

This is a story showing the life of the children on the planet Venus, a planet of constant rain. Also, the pleasure they find on the appearance of the sun after many years. Also, it depicts the possibility of future generations to shift among planets.

Through this article on Treasure Trove Short Stories Summary, the readers could get an idea on the themes of various stories covered in the book. Readers could be familiar with the topics making it easier for them to learn and understand them.

Share with friends
Previous
Operating System
Next
The Cold Within Summary