In this article Treasure Trove Poems Summary, you will be reading the summaries of all the poems included in the book of ICSE English. The summaries will include a description of the poet, the poem and the central idea of the poem. It will be of great help to the students in understanding and learning the poem. They will be better able to analyse the poem in a critical way. 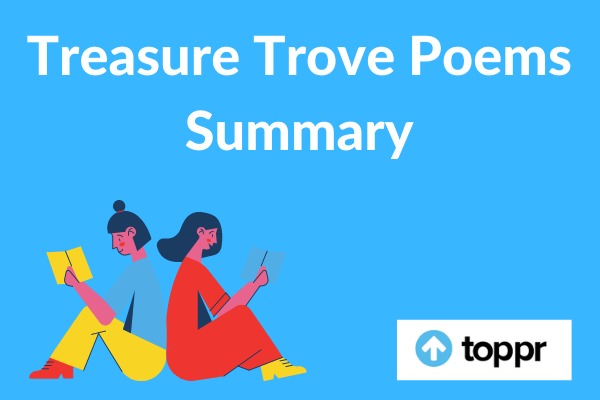 This article Treasure Trove Poems Summary is a brief introduction of various poems covered in the book. It includes the following poems:

The Heart of a Tree

I Know Why The Caged Bird Sings

The Heart of a tree

In this poem, the poet depicts the usefulness of trees for the environment and mankind. Also, it helps in the growth of the wealth of the nation.

The author in the poem, The Cold Within, illustrates the consequences of letting our prejudices conquer over our humanity. Discriminating others in any way lead to our downfall and even more. Also, it gives a message to live in harmony and feeling of oneness with each other.

This poem revolves around an important ornament for women.

This is a poem with a theme of the Battle of Blenheim offering deep insights on war and it’s aftermaths.

Through the poem, Television, the poet advises the parents to remove the television from their homes as it destroys the power of imagination and creativity in the children. However, he requests to install a bookshelf in its place as the habit of reading books is all worthy.

Daffodils is a beautiful poem by William Wordsworth in which he praises the beauty of daffodils that leaves a lasting memory in his heart. It carries a theme of the beauty of nature the hat could act as healing to a depressed heart and fill it with the joy of living once again.

I Know Why The Caged Bird Sings

The poem ‘ I Know Why the Caged Bird Sings’ illustrates how the power of the character and love for literature could assist in overcoming racism and trauma.

This poem ‘The Patriot’ throws light on the harsh reality of those leaders who remain true to their feelings of patriotism.

The poem speaks about an incident in the life of a Sufi saint who encounters an angel. The angel was writing accounts of those who love the Lord.

It is based on a story of nine differently-abled athletes in a Special Olympic Event. We will get to know how they finish the race.