In this article, you will be reading After Blenheim Summary, a famous antiwar poem by Robert Southey in 1798. The theme of the poem is the famous battlefield of Blenheim. The poem begins with two kids playing near their cottage and a skull has been found by one of them. They are very surprised and curious, they ask their grandfather about the skull. The grandfather, Kasper, then tells them the story behind it. Let us study the After Blenheim Summary in detail. 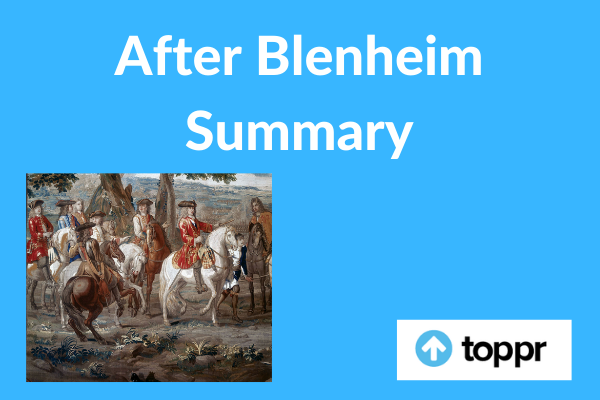 After Blenheim Summary in English

In the first stanza of After Blenheim Summary, the poet describes a vivid scene of a summer evening. After returning from work farmer Kasper sits in front of his cottage as he is very tired. He is watching his grandchildren are playing in the green field.

In the second stanza, Wilhelmine saw her brother playing with something large smooth and white, which he had found beside the river. He is surprised and curious about it and then he takes it to his grandfather to ask about it.

In the third stanza, old Kasper takes the round thing from the boy and after a brief look of it, he finds it to be a skull of some soldier who died in the war. The old man also levels the battle of Blenheim is a great victory.

In the fourth stanza, the old man tells about the thousands of soldier who died in the famous war of Blenheim. He also tells how he found many such things while digging the fields. The old man believes the triumph of the battle of Blenheim is an example of sheer patriotism. He believed that the soldiers sacrificed their lives for the people of the country and they did not die in vain. The old farmer served the purpose of victory in the battle.

In the fifth stanza, the children were more curious to know more about it after hearing the story of the war. Little Wilhelmine was so curious to know the reason behind the war and what they fought for each other.

In the sixth stanza, history says that the English army defeated the French-Bavarian army in war. The old man doesn’t know the reason behind it and never tried to know about it. He remembers only one thing it’s a famous victory and he is saying it repeatedly to put some belief in it.

In the seventh stanza, the old man says his father lived in a small village of Blenheim near a war. The French soldier attacked the village and burnt all the homes of innocent villagers. So his father moved to another place with him but couldn’t find a home because of the war. They had to roam from one place to another.

In the eighth stanza, the poet describes the severity of the battlefield. Fire and sword represent destruction, death and horror. He insists that the death of the mother and newborn baby as the death of innocence. But he thinks such things must be there at every such famous victory. He intentionally repeated the word famous victory to create a sense of irony.

In the ninth stanza, he tells about the horror scene after the battle was won. Thousands of bodies of soldiers lay rotting in the field. But again he mentions that such things must be there at a famous victory.

In the tenth stanza, the poet praises Prince Eugene and the Duke of Marlboro for the victory. But the little Wilhelmine thought it was a wicked thing and wondered how her grandfather praises such things. But the old farmer again levels the war as a famous victory despite hiding all the destruction caused by the war.

In the eleventh stanza, he says everyone praised the duke for the win but then little Peterkin anticipated and asked about the purpose of the war and what good did it do? The old man again repeats it was a famous victory. The famous victory is an epitome of irony here.

Conclusion of After Blenheim

The story teaches us nothing can justify the loss of life. Children are able to understand this but youth stills battle to resolve the conflicts.