Summary of The Little Match Girl

In this article, you will be reading The Little Match Girl Summary. It is a story of a little girl who, unable to sell her match sticks dies of cold and hunger on the street even as, people are celebrating the birth of the Christ child inside their warm. This story reflects about the unhappy childhood of a little girl, her sadness, dealing with loss and death. 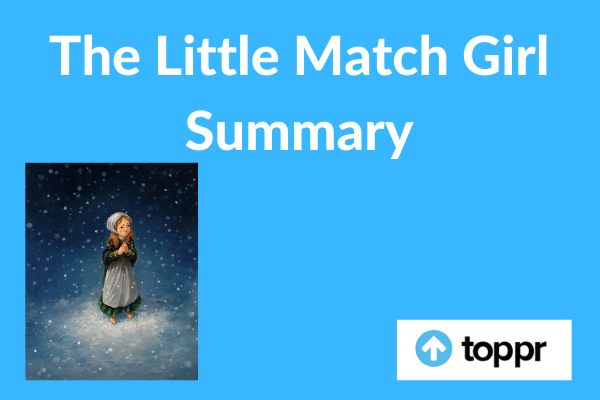 This story, the Little Match Girl Summary is a story of a little girl. It was New Year’s evening, snow was falling and darkness was gathering. The evening was bitterly cold. In this darkness a poor little girl walked, bareheaded and barefoot, through the streets. She had been wearing slippers of her mother when she left home. The little girl had been trying to cross the street and suddenly she saw two carriages coming very fast. So naturally, she trying to cross quickly and in the process, her slippers came off they were too big for her. One slipper was lost and the other one was taken away by the unknown boy. The boy bullied the girl as she was a soft target for him.

So the little girl walked about the streets on her naked feet and her foot became red and blue with the cold. In her bag, she carried many matches and she had a packet of them in her hand as well. Today she was unable to sell any matches and no one had given her a single penny. She crept along, shivering and hungry. The narrator called it’s a picture of misery.

The snowflakes fell on her long golden hair but the girl did not think of her appearance now. Lights were shining in every window of every house and there was a beautiful smell of roast goose in the street as it was an evening of the new year. But the little could not think of anything else.

She went to a corner formed by two houses, one of which projected further out into the street than other. She tucked her legs up under her but she felt colder and colder. As she had not sold any matches and earned not a single penny she did not dare to go home. She thought her father would beat her and besides, it was so cold at home. Their home had an only roof above them and the wind whistled through that. Her hands were almost numb with cold. She pulled just one small match from the packet to warm her fingers.

It had a warm and bright flame like a small candle but it seemed to the little girl if she were sitting in front of a great iron stove. The fire gave out such lovely warmth as the child already stretched her feet to warm them too. The flame vanished and she sat with the burnt match in her hand.

In the next morning people passing by the lane and see the poor girl lying dead in the corner and think that she must have frozen to death in the cold. The people see the brunt matches and conclude that she had been trying to warm herself. The narrator says these people have no idea of the beautiful visions she has seen and now she is far away from the cruel world.

Conclusion of The Little Match Girl

The story teaches us how selfish and insensitive human beings can be. The people are so selfish in the real world.  They are not truly doing what Jesus has been wanted to do.