The Patriot summary is one of the most famous poems of the 19th century English poet Robert Browning. It is one of those pieces for which Browning has adopted a modern literary device called the dramatic monologue. As such, “The Patriot” focuses on the narrator, who dramatically refers to himself. His monologue tells the story about a man who was once admired by the people as a great hero but was eventually mistaken and rejected by the latter.

Today, he is going to be hanged, in front of the public for a crime he insists he had not done. The sad tone of his monologue concludes with a positive note where he shares the belief that when he enters heaven after his passing, God will redeem him from the misconceptions of his fellowmen. Let us study The Patriot summary in this article. 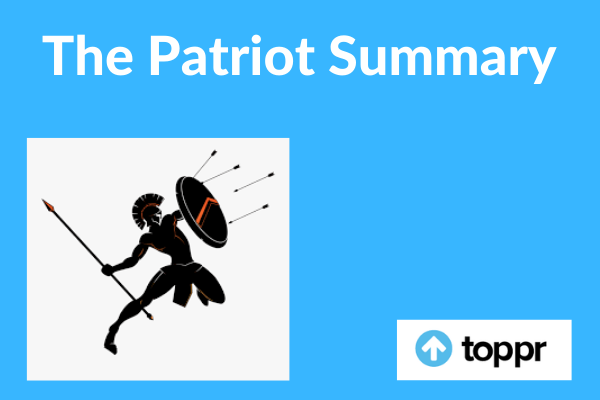 The Patriot Summary in English

The Patriot summary is a famous dramatic monologue by a great author Robert Browning. Just like in poetry, My Last Duchess or The Last Ride Together, this poet also uses a single speaker. In this poem, The Patriot, Browning introduces a patriot to speak of his fortune that changed in a single year.

When the poem starts, the speaker recollects his experiences of this exact day only a year ago. And he claims that his countrymen welcomed him victoriously. The civilians of his country paved the pathway with roses and myrtle to welcome him. Also, they crowded the roofs of the houses to see the speaker for once. And the churches too, are swinging their banners to greet the patriot.

In the second stanza, the speaker goes on to state that even that day, the air was full of joyful sounds of bells. In addition, he explains how thousands of people crowded against the old walls of their houses to see him. They even applauded and called out for their icon, the speaker. So the port remembers that he had even assured to deliver the sun to them. Here the poet uses the sun metaphorically to show that the speaker was willing to do any impossible deed for his countrymen.

But in the third stanza, the speaker states that he was foolish enough to try to get beyond his boundaries. In fact, the praise of the countrymen made him too optimistic, to be over-ambitious. Here Browning metaphorically refers to the legendary Icarus. Icarus died because he became overly-ambitious to fly to the sun on his waxwings. In the same way, much as Icarus, the speaker is going to face his demise, which he realises a year later.

So now, after a year, the speaker shows the change in the behaviour of countrymen towards him. He states that there is no one on the roofs of the houses or the road to greet him. However, he can see a few people sitting next to the windows of the houses, who are actually sick and weak. So for the speaker, they are not there. Instead, the speaker ironically states that all the citizens gathered by the Shambles Gate. They are taking him to the shambles gate to execute him. So those who once greeted him as a patriot, are now waiting by the scaffold to see his execution.

Besides, the speaker mentioned his present miserable plight. He says that people are dragging him vigorously. His wrists are bleeding too, because of the rope that binds them. He even feels that someone from the crowd throws a stone at him and, his forehead is bleeding. He regrets that misdeeds of a year have wiped all of his good deeds from their memories.

So in the final stanza, he is struggling to collect some optimism in such a painful, state. He says he has served his purpose, so now it is his time to leave. Here again, Browning imposes the philosophical truth of existence that Shakespeare already mentioned in his play As You Like It. The same idea used by Shakespeare in his lines:

Even in the brinks of his death, he consoles his soul so that he will earn his reward in heaven. While his countrymen have failed to give him the respect he deserves, he hopes to get it in the company of lord.

Conclusion of The Patriot

The Patriot is a harsh critic on the essence of public opinion and volatility of the public in general. The poem almost absolves the speaker of his misdeeds and very cleverly highlights the rabid fever that the public has committed. While this poem indicates the ambiguity of life and fortune, it concludes with an optimistic note. The fact that the patriot in the poem turns to God for a fair judgement of his deeds without any regret or shame confirms the justification. In all, the compassionate and empathetic portrayal of the condition of the narrator; and the poet’s brilliance as a master of poetry makes “The Patriot” a remarkably exceptional one.

Share with friends
Previous
After Blenheim Summary
Next
Classification of Computers