Summary of From the Diary of Anne Frank

In this article, you will be reading From the Diary of Anne Frank Summary which is based on the background of World War II. This is an autobiography of a young girl Anne Frank, who expresses her thought in a diary. Her father has gifted the Diary on her 13th birthday, which she calls with the name of ‘Kitty’. Anne Frank is a Jewish girl who is hiding during World War II, in order to avoid the Nazis. She shares her experience and the story during her time of depression. Also, she hides in the secret annexe on the Prinsengracht 263 in Amsterdam with seven other people. She lives there for two years and describes all her experiences in the Diary. Thus, she puts her energy into studying and writing, gaining knowledge of politics and literature. After her death, she becomes world famous because of the Diary. 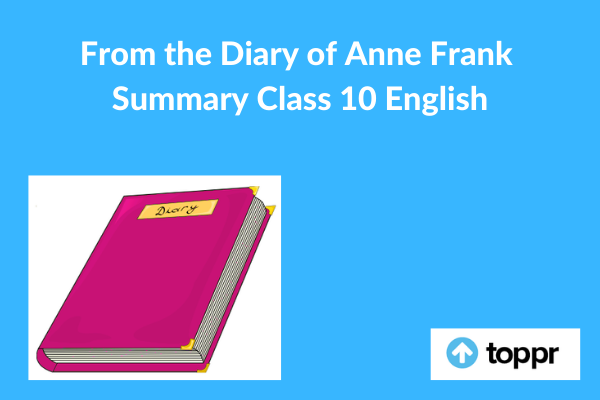 From the Diary of Anne Frank Summary in English

The author feels that it is strange and unusual for her to write a diary because it is the first time she is doing it. She feels that in the future no one will read about a young girl’s past experiences. But then she puts these thoughts away and decides to write her thoughts. The author is feeling very lonely as she has no friends to talk to. She wants to give her need of friend a shape, hence decides to name the diary as “kitty”. The writer feels that the paper has more capacity to absorb thoughts rather than people who have low patience level. She has a good time with friends but cannot share everything with them as they are not true friends. She refers to her father as the most lovable who presents her the Diary on her 13th birthday.

On June 20, 1942, she mentions how her class is nervous about their results. The author says that the only subject she is unsure about is mathematics. She and her friend, G are trying to stop the students from making noise, but to no avail. According to the author, about the quarter of the class should not pass as they do not participate in any activities.

Anne recalls how the maths professor is constantly irritated by her talkativeness. While talking in his classes he gives her extra homework as punishment. The first punishment is to write an essay on “Chatterbox”, which the author thinks as weird. She imagines about the topic and decides to present concrete arguments in support of talking. She writes that she will try to better herself but cannot eliminate talking completely. The professor finds it amusing but allots another topic after she did not change her nature.

The topic is An incorrigible chatterbox which refers to a habit that is difficult to change. After keeping an eye on her, the professor gives her another topic, Quack, Quack, Quack, Said Mistress Chatterbox, as a punishment. She runs out of thought after writing two times on a similar topic. She decides to write her third topic in the form of a poem and writes a satire and luckily the professor takes it lightly. The professor recites the entire poem in front of the class and the author talked uninterruptedly after this.

Conclusion of From the Diary of Anne Frank

In the story From the Diary of Anne Frank, we can conclude that a young student needs to talk and feel joyous in order to stay mentally fit.